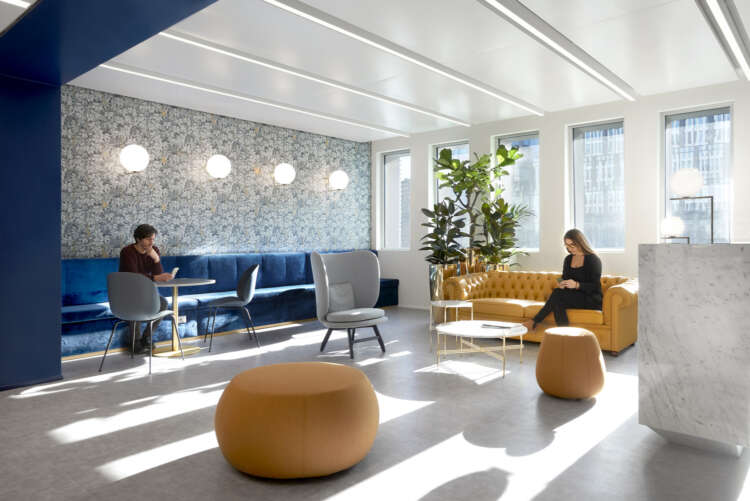 Following an extended period of home working, employers across the Financial Services sector are now encouraging staff to once again return to the office – but many are struggling. We’ve seen the likes of Goldman Sachs, asking staff to return to the office ‘with immediate effect’, while Citigroup has informed employees that they need to come in for ‘at least three days a week’. However, recent research conducted by Unispace of office workers in the Financial Services sector suggests this could prove to be quite difficult, with 63% of staff across Europe reluctant to return. But what are the main drivers of this reluctance?

In Unispace’s study, when segmenting employees operating in the Financial Services sector, it was revealed that 63% of the workforce was reticent about returning to the physical workplace. Of these, 26% said they enjoyed the extra free time they gained by not commuting, 24% said they prefer being at home to work around childcare and other caring responsibilities, and 24% believed they could do their role just as effectively at home. A further 14% said they are not looking forward to spending money on things like travel and lunch, 14% said they were worried about the journey to work and 13% said it ‘feels unnecessary’.

From these findings, it’s clear there need to be some vast changes to the workplace, however, the impact of having access to a physical office space should not be underestimated as it presents unique offerings that working from home is unable to match. A well-thought-out office space is conducive to creative thoughts, personal interaction and collaboration that simply doesn’t come naturally in a virtual environment. The findings of our research reinforce this, with those office workers who were happy to return stating that missing social interactions was the top reason for their desire to head back (40%) followed by missing their colleagues (35%) and wanting the opportunity for increased collaboration at work (27%).

There’s clearly some reluctance to return to the workplace across the Financial Services sector, but perhaps the most concerning result was the discrepancies we identified between what staff want, and what employers believed would encourage people back.

Here are the five common mistakes firms in the Financial Services are making:

It’s safe to say that the pandemic has permanently changed employees’ working habits and preferences, introducing us to new ways of working that many now either favour or have grown accustomed to: a recent report from the McKinsey Global Institute found that around half (52%) of employees now prefer to blend time in the office with working from home: either through a split-week model, alternating week to week, or choosing what works best for them on any given day. Moreover, our sector-specific survey also revealed that the majority (56%) of Financial Services employees interviewed want to move forward with a hybrid set-up, while 36% said they would be happier to be completely office based and only 9% opted to permanently work from home.

Given the evident popularity of hybrid working, those firms who do not offer this as an option may not only fail to get their staff to happily return to the office but could also fail to attract and retain top talent. Mandating returns during a skills shortage is certainly going to have an impact on businesses, so compromise is key, though selling the benefits of the office will help persuade Reluctant Returners that they are missing out by staying away from the workplace.

To fully accommodate a hybrid working model, the office can’t simply stay the same. Office design now needs to provide staff with the right set up so that employees can experience the same benefits of remote work while also making it easier for colleagues working from home to communicate with peers in the office. For example, having quiet and private spaces to allow for video calls and sensitive conversations, separate areas for creative collaboration, and ways for staff to effectively partake in a meeting from the office will be essential.

When asked what they thought would encourage employees back to the office, just 29% of employers in the sector said flexible start times would appeal. Only 21% said having separate spaces for both collaborative and quieter work and 21% said offering free drinks, coffee and snacks would encourage their staff to return.  Comparatively, when employees themselves were asked the same question, there was a greater appetite for incentives to return to the office, with 77% interested in flexi starting times, and 77% saying free drinks, coffees and snacks would entice them to return. Based on these figures, it seems that employers may have misjudged the wants and needs of their workforce. It is important to add, that what staff want will differ from firm to firm and employers should be finding out exactly what their people want and avoid making presumptions.

Alongside amenities, a large number of employees (71%) in the Financial Services sector also showed a keen interest in access to training and development programmes, which again was not a focus for employers. If your firm does not offer robust training and development programmes, then this is certainly something that should be introduced, and the cultivation of skills will definitely stand businesses in good stead in what is an extremely tough labour market. It is important to add, that training and development – just as the office itself – needs to be suitable in the hybrid world of work. Remote training that is delivered while one or more individuals are in an open plan office space due to a lack of breakout areas, for example, simply won’t work.

With the above insights in mind, the issue of communication needs to be addressed. Staff need to be shown what they are missing in the office and where changes are being made to the space itself, employees need to be made aware why and what benefit this will have to them.

Moving onwards with the workplace

As we have seen, there is clearly a level of reluctance within Financial Services to return to the office, but our research certainly indicates that, with some compromises, employers can entice them back – and retain them – with a combination of the right incentives, the right office space, and training and development opportunities. But employers will only get this right with an accurate understanding of the unique wants and needs of their staff.

The way of work as we know it has changed in a way that is more permanent than any of us would have predicted. Despite this, the office itself is by no means redundant, employees just need to be shown what they’re missing once again: that is a workspace with a purpose, that provides more than a home ever could.

How banks can meet compliance requirements as Russian sanctions increase

Banking on automation to manage a multicloud financial services infrastructure