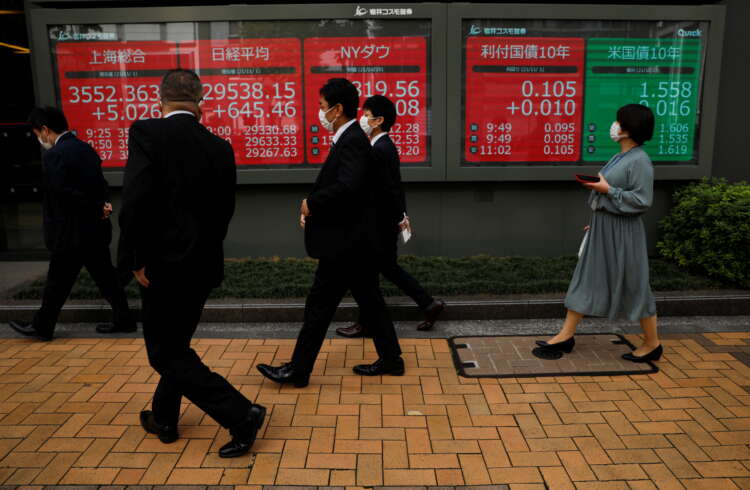 SYDNEY (Reuters) – Asian stocks wobbled and risk-sensitive currencies in the region sagged on Friday as investors bet inflation will prompt U.S. rate rises next year, even with the new Omicron coronavirus variant casting a cloud over the outlook.

MSCI’s broadest index of Asia-Pacific shares outside Japan fell 0.4%. Japan’s Nikkei touched a two-month low and is set for a 3% weekly fall. [.T]

“Just about everyone at the Fed now says tapering needs to be accelerated and rate hikes happen far sooner than we had thought,” said Rabobank global strategist Michael Every.

“The curve flattening we see speaks volumes on that.”

Federal Reserve Chair Jerome Powell began the shift this week by saying the bank will discuss a faster taper at its meeting this month, prompting bets that near-term hikes end up curbing future growth, inflation and ultimately rates.

The gap between two-year and 10-year Treasury yields has slammed 16.6 basis points tighter this week, the sharpest curve flattening since June 2020. Ten-year yields held at 1.4410% on Friday, down 4.4 bps this week.

“A print above 550,000 jobs should see the faster Fed-taper trade reassert itself,” said Jeffrey Halley at brokerage OANDA.

European equity futures and FTSE futures were last up about 0.4%.

Oil, another growth proxy, has also taken a beating this week and although it steadied on Friday, with Brent crude futures at $70.89 per barrel. It is on course for a 2.5% weekly fall and is 18% below a three-year high hit in October. [O/R]

Oil cartel OPEC and its allies agreed on Thursday to go ahead with planned production increases.

While plans by Didi to shift its listing to Hong Kong were not altogether unexpected, the news of its U.S. delisting still worsened the fragile mood.

It also capped a bleak few hours for investors in the sector, after Southeast Asia’s ride hailing titan Grab fell 20% on its Nasdaq debut.

Shares in Japanese conglomerate SoftBank, exposed to both stocks, slumped 3% to a 14-month low – with added disappointment from a U.S. regulatory challenge to a takeover of SoftBank-owned chipmaker Arm by Nvidia.

“Delistings starting to happen gives some jitters over the uncertainty as to how this impacts on the broader U.S.-China picture,” said Bank of Singapore analyst Moh Siong Sim.

In the United States, the Dow Jones Industrial Average’s 1.8% jump on Thursday was its biggest one-day rise since March, but it is still tracking toward fourth weekly loss in a row. [.N]

CBOE’s volatility index, sometimes referred to as Wall Street’s “fear gauge” is heading for its sharpest one-week leap since February 2020. Implied volatility gauges in currency markets are also surging, even if Friday trade was calm.

The euro was steady at $1.1299 and the yen held at 113.23 per dollar, while the Australian and New Zealand dollars slipped – with the Aussie briefly hitting a one-year low just under 71 cents. [FRX/]

Traders will need to wait at least another week or so for an early read on Omicron’s virulence or vaccine resistance.