LONDON (Reuters) – Sterling steadied above $1.40 against the dollar on Thursday after losing its perch near $1.41 the previous day when stronger than expected U.S. inflation data pushed the dollar higher.

UK GDP figures, which came in above expectations, had helped the pound stay strong on Wednesday, but it lost ground after the U.S. data showed that consumer prices had increased in April by the most in nearly 12 years, news which pushed the dollar higher as investors turned more cautious.

“The better than expected March UK GDP yesterday underscored the bright outlook for the pound and the expected solid UK data this quarter should further support the currency,” said ING’s strategists in a note to clients.

“We expect euro-sterling to re-test the 85 pence level in the coming weeks. After the latest dip in sterling speculative positioning, sterling longs should start increasing yet again.”

CFTC positioning data showed that speculators reduced their net long position on the pound in the week to May 4.

By the end of Wednesday, sterling was the second best performing G10 currency after the Canadian dollar – up 3.2% against the U.S. dollar year-to-date. Bets that Britain’s rapid vaccination drive will lead to a quicker economic rebound have largely driven the pound’s gains this year. 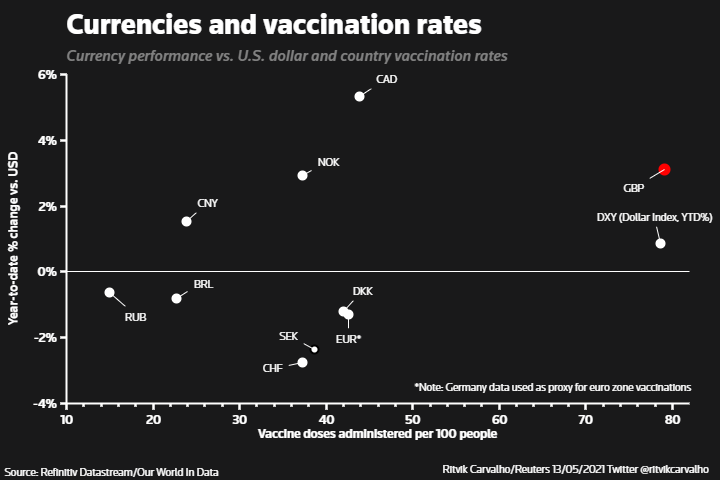 The currency has also benefited from the Bank of England beginning to taper its bond purchasing programme last week, on the back of the improving economic outlook.

Bank of England policymaker Jonathan Haskel said on Wednesday he was not too concerned about the medium-term inflation outlook in Britain, but would watch out for damage done by the pandemic to the country’s productive capacity.

Last week the BoE forecast consumer price inflation would rise above 2.5% by the end of this year from 0.7% currently, but then fall back to its 2% target over the course of next year.

Elsewhere in the economy, British house price inflation hit its highest level since the late 1980s in April as buyers raced to take advantage of an extended tax break just as sellers retreated from the market, a survey showed this week.