Europe on course to end winter with plenty of gas: Kemp

Greece PM senses "momentum" in "Elgin Marbles" talks with Britain
Our website publishes news, press releases, opinion and advertorials on various financial organizations, products and services which are commissioned from various Companies, Organizations, PR agencies, Bloggers etc. These commissioned articles are commercial in nature. This is not to be considered as financial advice and should be considered only for information purposes. It does not reflect the views or opinion of our website and is not to be considered an endorsement or a recommendation. We cannot guarantee the accuracy or applicability of any information provided with respect to your individual or personal circumstances. Please seek Professional advice from a qualified professional before making any financial decisions. We link to various third-party websites, affiliate sales networks, and to our advertising partners websites. When you view or click on certain links available on our articles, our partners may compensate us for displaying the content to you or make a purchase or fill a form. This will not incur any additional charges to you. To make things simpler for you to identity or distinguish advertised or sponsored articles or links, you may consider all articles or links hosted on our site as a commercial article placement. We will not be responsible for any loss you may suffer as a result of any omission or inaccuracy on the website. 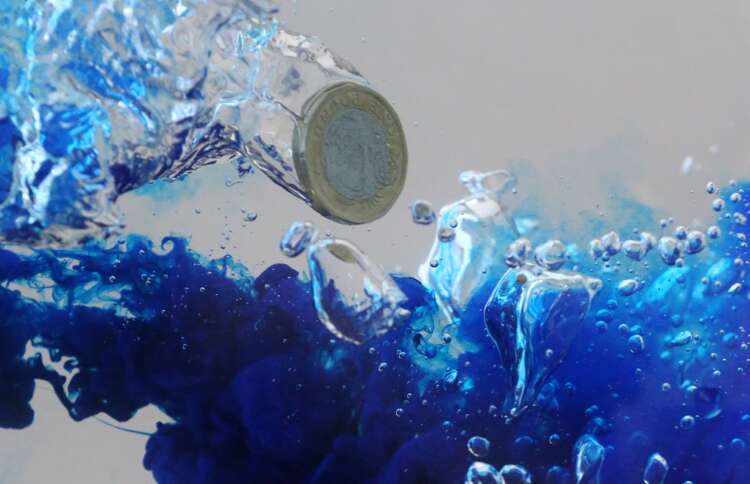 Truss and Kwarteng refused to bow to demands to publish earlier forecasts of government growth plans and the impact of planned tax cuts which have led to turmoil in the financial markets this week.

In a volatile session, the British currency edged 0.1% lower to $1.1112 at 1420 GMT after slipping as much as 0.8%. It had touched a one-week high of $1.1235 in early London trading that took it close to erasing all of the steep losses in the aftermath of the new government’s fiscal plans announced last Friday.

The British finance ministry said in a statement after the meeting with the Office For Budget Responsibility (OBR) that independent economic and fiscal forecasts would be published on Nov. 23.

Earlier, in a turnaround from the record lows the pound struck on Monday, and helped by emergency Bank of England bond buying, the British currency rose to the highest in a week. It was still heading for its biggest weekly rise since mid 2020, but still set for its second deepest monthly drop since October 2016.

Chris Turner, head of markets at ING said the government “still has to find a way to balance the books and avoid a very negative assessment from the rating agencies”.

“A Conservative party conference this weekend suggests it is far too early for a U-turn on fiscal policy and, combined with a very difficult external environment, sterling should stay vulnerable,” he added.

Versus a weakening euro, hit by record high inflation in the euro zone, the pound rose to one week high before trimming some of those gains, and was last up 0.5% to 87.92 pence.

On Thursday, the pound jumped 2.13% as the Bank of England (BoE) conducted a second day of bond buying to stabilise markets, sending gilt yields higher. [GB/]

Truss vowed to stick with her fiscal plans on Thursday, in her first comments since the turmoil erupted in markets.

For the BoE, traders predict a 125 basis points interest rate hike at its next meeting in early November.

In another sign of the economic slowdown caused by a cost-of-living squeeze and rising interest rates, British house prices failed to rise in monthly terms for the first time since July 2021, mortgage lender Nationwide said on Friday.

But British lenders approved many more mortgages than expected in August.

Data on Friday showed Britain’s economy unexpectedly grew in the second quarter but was below its pre-pandemic peak, contrary to an earlier estimate that it had recovered.

Another indicator, released by the Recruitment & Employment Confederation, showed British job vacancies dropped to the lowest level since the COVID-19 pandemic last week, in a sign of a further weakening in the labour market.