Stephen Hester – Was ejecting him smart? 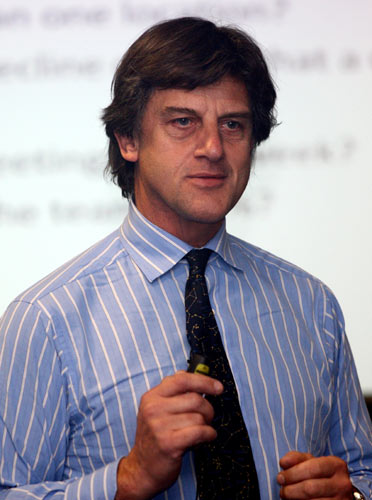 “An ejection seat? You must be joking”; “I never joke about my work “replied ‘Q’ to James Bond’s incredulity but this conversation could easily have been between Stephen Hester and the Chairman of RBS, Sir Philip Hampton. I doubt that the Chairman’s sacking of Hester was as much his desire as that of the treasury and George Osborne. Hester ruffled a lot of feathers in his 5 years performing a seemingly impossible turnaround of RBS from the wreck left by Fred Goodwin and Tom McKillop to a bank that is now leaner and with decent balance sheet and results. So good that it is now being thought about as a target to sell back to the private sector.

Hester I believe will be judged as a great leader and despite the label as a ‘banker’ (i.e. a bad person) will be revered for what he achieved. When a person takes on a role in a broken organisation and turns it around then there is little room for doubt about that person’s leadership skills. In this case they were exceptional. RBS was in desperate financial straits and would have gone under had not the treasury bought it in 2008 on behalf of the British tax payers. RBS had circa 20,000 employees before the crash. This was no small ship to change the direction of. It was also a complex organisation made up of retail and investment banking. Investment banking was the cause of so much failure in 2008 and yet its profitability is now vital to UK PLC and in particular to RBS.

Hester was a man of immense determination who has apparently total belief in himself and his judgement. He also had the force of personality to push decisions through and stick to his guns to get the changes and results that he wanted to see. It is possible that he may have been the only person in the country to be able to do the job and so well. This kind of strength of character is unusual. Just as Churchill was the man that was needed in 1940 so too was Hester in 2008. The comparison is interesting. I think Hester’s self-belief was greater as was the pugilistic style that he adopted to get his way. For him there was pretty much only one way – his way. Here lies one of the rubs. Hester was not there to do the government’s bidding other than turn RBS around. Governments however ‘do not do autocracy’ on the Hester scale and certainly not when it comes to things such as RBS which was an unwelcome new toxic asset on the country’s books. The treasury had to have its say and its say is rather more ponderous and bureaucratic than Hester’s style. His chairman was the main conduit between Hester and the Government and doubtless kept Hester away from some matters and meetings that would have irked him even more. But Hester was rightly not afraid to make enemies. However, the enemies can circle and call the shots when not expected or welcome.

So it turned out for Hester. When it came to discussing who would preside over the privatisation of RBS it was decided that Hester was not the man for the job. He was pushed out. He may have been asked to stay on until a successor was found but He would have found that irritating too. Such is his focus.

In my view, Hester, knowing that his project was near its end would have been very capable of seeing it returned to private shareholders and indeed would have helped achieve a better sale deal for the taxpayer than other CEO’s would hope to. Sure, he would have again wanted a handsome reward, the sort that the public and the government finds unacceptable but the truth is that Hester has been paid quite modestly in banking terms. The culture of excessive pay is not entirely if his making after all.

There is an adage in management:’give people the freedom to succeed and the freedom to fail’ Hester was almost given this until the last but now the government has put itself in the position whereby his successor must accept that the Government will interfere in the board and that the CEO may have his hands tied with gun to his head and asked to walk a tightrope. Who would want the job?

In conclusion; I think that the government interference in RBS though entitled has been misguided. Hester’s type is very rare and needed in this situation and leaves RBS with a headache in replacing him with someone of equal standing but then that is probably what the government thinks is right – a treasury lackie rather than a high driver of change for the sale.