Six reasons why blockchain is here to stay and how it will change the digital world. 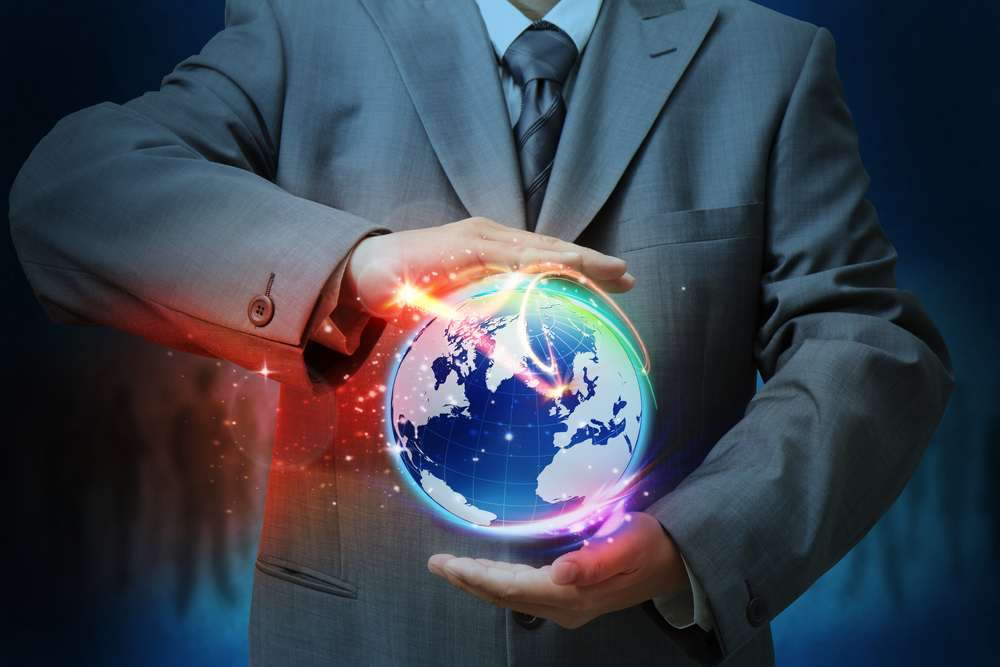 In the three years since blockchain technology was the private preserve of fintech geeks, it has grown from being the possible basis of smart contracts for financial services settlements to be the cure-all for the world’s IT woes.

Blockchain has been heralded by its supporters as the transformative technology of the 21st-century, yet so far, practical large-scale implementations of services based on blockchain have been few and far between. In fact, the only large-scale successful implementation to date has been cryptocurrencies in general and bitcoin in particular. Being famous – or perhaps infamous – for enabling the existence of bitcoin may not be the most auspicious start for something that is claimed will change the world, but the reality is that being bitcoin’s underpinning technology has provided a proof of concept that has stood the test of time for the last nine years and still counting.

Wait a minute, though, what about the $473 million Mt Goxbitcoin hack and the $70 million Bitfinex heist and all the other bitcoin thefts? Well, these were not the result of incursions into the bitcoin blockchain but the misappropriation of the keys – effectively, the passwords – to bitcoin blocks. These keys were held on the databases of the cryptocurrency equivalent of bureauxde change.It was rather like a safe-deposit facility leaving a list of numbers for the combination locks of the safes in its unmanned reception area.

It was the weak security around the traditional server and network infrastructure running those exchanges that was the flaw in providing access to the private keys of the exchange wallets which allowed a third party to transfer funds. The integrity of the bitcoin blockchain has remained intact and continues to deliver on the general blockchain promise of being an immutable, unhackable, distributed database of digital assets.

Here are the six reasons why blockchain is here to stay:

If this starts to sound like the digital equivalent of the physicists’Theory of Everything, it’s probably because that’s just what the reality may turn out to be.

However, this is not going to happen overnight. Realising the full potential of blockchain will be an evolutionary process and it will take time and a lot of trial and error. Furthermore, while blockchain technology will no doubt continue to be refined and improved, it is the impact of the applications built on the foundation of blockchain technology that will change the digital world.

The case of blockchain being a true foundation technology was first made by Marco Iansiti and Karim R. Lakhani in their paper “The Truth about Blockchain”in the January-February 2017 Harvard Business Review. They liken the evolution of blockchain to that of TCP/IP, the foundation technology of the Internet. They argue that there were four phases in the evolution of TCP/IP:

This evolution took more than 30 years for TCP/IP’s transformational potential to be realised. The result is that the developed world could not exist as it does today without the foundation technology of TCP/IP.

Iansiti and Lakhani argue that the same30 year timescale will apply to blockchain: 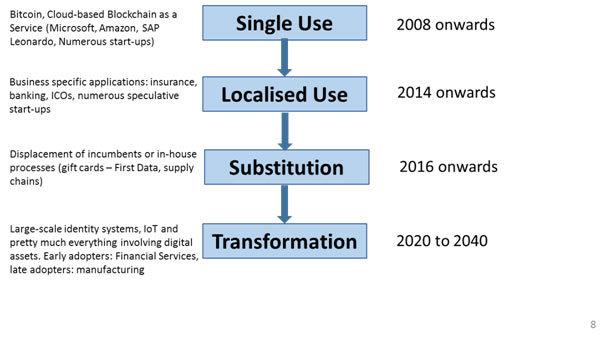 Before blockchain realises its potential as a true foundation of technology akin to TCP/IP, there are a number of technical challenges to be overcome but none are insurmountable. These are:

For those businesses picking up the challenge of exploiting the potential of blockchain by building practical applications, the situation is very similar to developing services to run on the internet in the early 90s in the pre-Windows era. For example, although blockchain 2.0 is programmable in itself, for practical use an interface or “platform” of some kind is required. At the moment there are two leading open source platforms available, Ethereum and the HyperledgerFabric. There is a specialist financial services platform called Corda developed by a consortium of banks and needless to say, Microsoft, Amazon and IBM are all developing user-friendly interfaces for deployment on a commercial basis.

Other smaller operations are developing interfaces largely focused on private, or permissioned, blockchains for localised use. 4D Data Centres has already successfully implemented a proof of concept for private blockchains using Hyperledger Fabric which will be offered to potential clients as a Blockchain as a Service (BaaS) platform. However, as with the FANGs, it is possible that one major commercial player will come to dominate the blockchain interface market, as was the case with Windows and the web, with perhaps an open source offering like Linux available alongside.

The major sector opportunities are already being staked out with heavy investment in blockchain-based applications for banking, financial markets, healthcare, insurance and supply chains. But there are a number of interesting developments where the disruptors of the last 20 years now look like being disrupted themselves. For example, Mycelia uses blockchain to link music content with payments, eliminating the need for intermediation through apps like Spotify. Similarly, JavaScript creator, Brendan Ickes’blockchain-based Basic Attention Token cuts out intermediaries and delivers trading of ad space on websites.

The immutability and security of blockchain is such that as a foundation technology it will enable the transformation of all aspects of the global economy that involve the use of digital assets. It will not happen overnight and there will be numerous false starts. But for once, blockchain is likely to be a technological innovation that will not only meet its much-hyped expectations but will also exceed them.