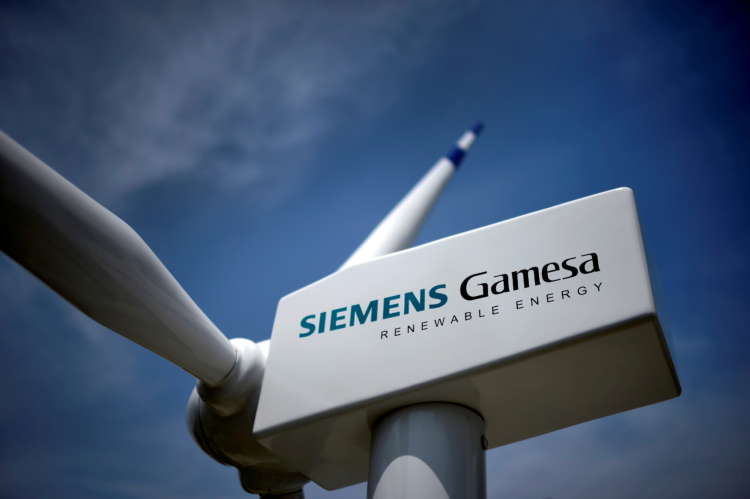 MADRID (Reuters) -Siemens Energy said on Tuesday it has no current plans to buy the one third of wind turbine maker Siemens Gamesa it does not already own, denying a Spanish newspaper report it had engaged banks to help it make such a move.

Spain’s stock market regulator suspended trading in Siemens Gamesa’s shares after Expansion newspaper said Siemens AG had hired Morgan Stanley to review options for the Spain-based business, including a possible takeover and withdrawal from the market.

The paper said Siemens had also hired Deutsche Bank to give an independent valuation.

Hours after the shares were suspended, Siemens Energy wrote in a letter to the Spanish regulator that it regularly reviewed its entire portfolio and that this included its stake in Siemens Gamesa.

“While we can of course not exclude any scenario in the future, we can confirm that SIEAG (Siemens Energy) is currently not working on a takeover bid in relation to SGRE (Siemens Gamesa),” the letter said, adding none of the mentioned banks had been mandated.

At current market valuations, the 33% share in Siemens Gamesa that Siemens Energy does not already own is worth around 5.7 billion euros ($6.96 billion).

Analysts at Citi, in a note triggered by the newspaper report, said they would prefer Siemens Energy to cut its stake to just above 50% to free up cash for growth, including in hydrogen.

Shares in Siemens Energy retreated after gaining as much as 4% on the news, while Siemens Gamesa’s stock rose more than 3.5% after the suspension was lifted.

Siemens Energy Chief Executive Christian Bruch said earlier this month it was too early to talk about buying out the rest of Siemens Gamesa, but that this would become an issue at some point.

Siemens Gamesa was formed in 2017 through a merger of Spain’s Gamesa and what was then the wind business of Siemens.

(Reporting by Isla Binnie in Madrid, Christoph Steitz and Arno Schuetze in Frankfurt; Additional reporting by Emma Pinedo in Madrid and Alexander Huebner in Munich; Editing by Jan Harvey and David Evans)