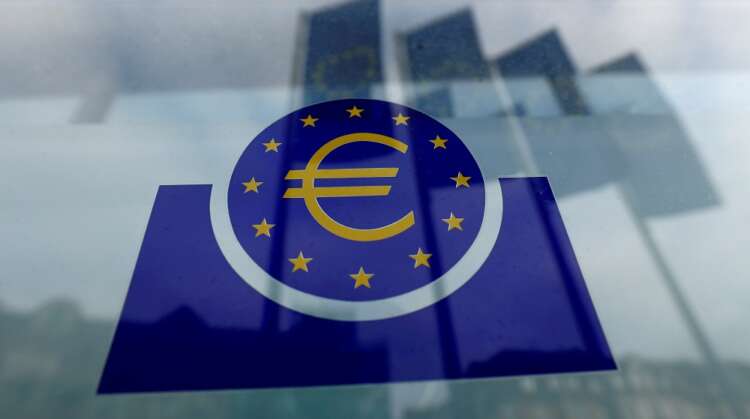 By Yoruk Bahceli and Dhara Ranasinghe

LONDON (Reuters) -Short-dated euro zone bond yields and the single currency fell on Thursday as traders pared back rate hike bets after the European Central Bank signalled a steady reduction of stimulus and refrained from switching to a more hawkish stance.

Bond yields have marched higher in recent weeks as investors bet the ECB will hike rates sooner rather than later to curb inflation which, at 7.5%, is well above its 2% target.

But the ECB concluded its latest meeting with cautious steps to unwind support and avoided a hard schedule. It confirmed the direction of travel it laid out in March with few specifics beyond the coming months.

The bank will only start raising interest rates “some time” after it has ended asset purchases, president Christine Lagarde told a news conference, adding that “some time” may refer to anywhere between a week and several months.

The lack of a more hawkish shift pushed traders to trim rate hike bets. Money market futures now price in around 60 bps worth of ECB hikes by December, versus the earlier 70 bps.

Futures dated to the ECB’s July meeting price in around 13 bps worth of hikes, down from 20 bps earlier on Thursday.

“So the communique kind of removes this extreme pricing.”

German 10-year yields, the benchmark for the euro area, was last 6 bps higher at 0.84%. They had initially dropped 2 bps following the ECB’s policy decision.

That steepened Germany’s yield curve as measured by the gap between 2- and 10-year yields to 77.8 bps, the steepest since January 2019.

The yield curve “reflects that ECB is in no rush to tighten monetary policy despite inflation (being) elevated”, said Piet Christiansen, chief analyst at Danske Bank.

Yield curves flattening in other markets like the United States have been seen as an indication that central banks might choke off growth and potentially ignite a recession in their bid to stamp out inflation.

In equities, the broad STOXX 600 index extended gains and was last up 0.7%, with a positive Wall Street open helping the rally. A sub-index of euro zone banking stocks was almost 0.9% higher.