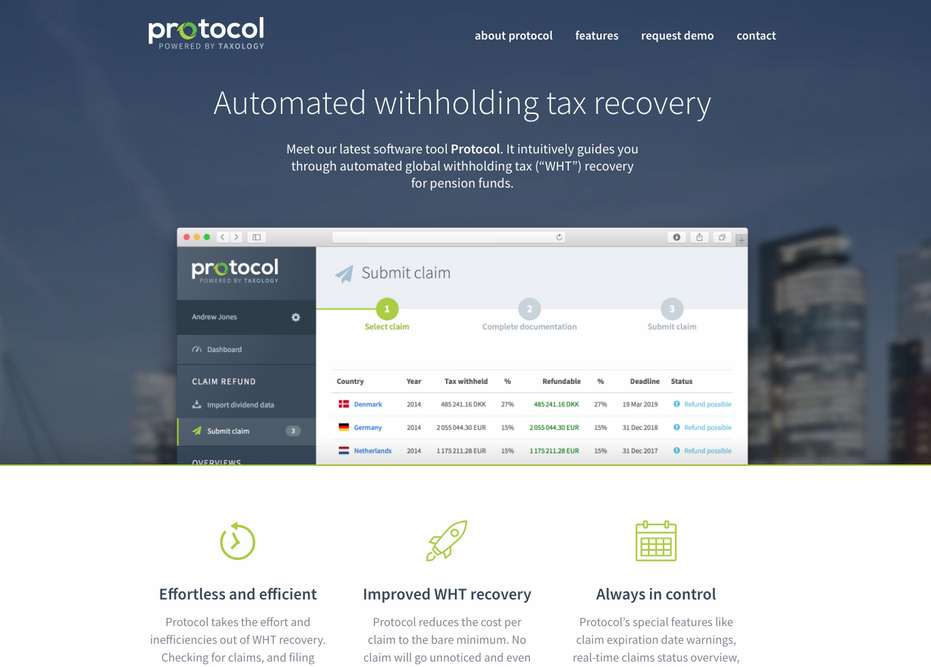 The Protocol platform, developed by fintech start-up Taxology, saves time and costs for pension funds, unlocking withholding tax refunds that are overlooked or otherwise too labour intensive to claim.

A new web-based solution, called Protocol, which automates global withholding tax (WHT) recovery has launched in the North American market, as part of a worldwide roll out by fintech start-up Taxology.

The software platform, aimed at pension funds, investment managers, custodians, and tax advisors, means checking and filing for WHT claims can be undertaken in minutes rather than days or weeks.

Identifying claim opportunities and preparing a claim is time consuming because the conditions of a right to a reduction or refund of WHT, the recovery procedure, the documentation requirements, and the statutes of limitations are different in every country and change from time to time.

“Pension funds are missing out on WHT refund opportunities on a very large scale because it is so difficult for pension funds and their investment managers to get a solid grip on WHT recovery,” said Jeroen van der Wal, managing director and founder of Taxology, the developers behind Protocol.

“Our solution helps pension fund managers improve their coverage ratio with several basis points, by picking up money they are currently leaving on the table because they are unaware they can reclaim it, or because they are aware, but the manual labour involved does not justify the claims.”

Protocol, developed by Rotterdam-headquartered fintech company Taxology, is an intuitive, secure, Cloud-based platform, which reduces the cost per WHT claim by taking pension fund managers through a three step process from inputting pool participation data where required and importing dividend data, to submitting a claim.

“The platform generates a claim overview based on the imported dividend data showing which countries have refundable taxes, indicating which taxes have already been claimed and showing submission deadlines,” said Casper Plat, chief operating officer, Taxology.

Protocol’s North American launch follows successful development and piloting of the platform in several European countries, including the Netherlands.

Fintech start-up Taxology, set up in 2016, will roll out its WHT solution across the European Union by the end of 2018.