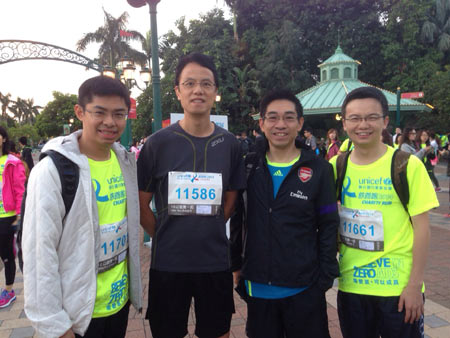 On November 23, 2014 ONC Lawyers and their colleagues joined the UNICEF Charity Run 2014 at the Hong Kong Disneyland Resort to raise fund to support UNICEF’s AIDS prevention and treatment works.

The UNICEF Charity Run has been successfully held for 8 consecutive years at Hong Kong Disneyland Resort, Lantau Island. The event is co-organized by Hong Kong Committee for UNICEF (UNICEF HK) and Hong Kong Amateur Athletic Association. It is not only the flagship annual fundraising event for UNICEF HK, but also the second largest distance running event in Hong Kong.

With the support of over 72,000 participants and donors’ generous contributions since 2006, UNICEF Charity Run has raised more than HK$56 million to support UNICEF’s HIV/AIDS prevention and treatment works in over 150 countries, aiming to eliminate mother-to-child transmission of HIV.

UNICEF has already provided HIV rapid diagnostic tests for over 1 million pregnant women and ‘one pill daily’ treatment for more than 620,000 pregnant women living with HIV, to prevent the transmission of HIV to their babies during pregnancy, delivery and breastfeeding. This will not only give the babies the best chance of being born HIV-free, but also protect the mothers’ own health so that they will be able take care their babies and families, rather than in the worst case, leaving their babies as AIDS orphans. In addition, UNICEF Charity Run has also supported the Sichuan Earthquake Rebuild Program.

ONC Lawyers is a professional and dynamic legal practice based in Hong Kong.  They were established in 1992 and have been growing continuously since then and have now become one of the largest local law firms with more than 100 members of legally-qualified and supporting staff.  The major areas of practice of their lawyers include banking & finance, capital market, China attesting services, China practice, construction & arbitration, corporate & commercial, criminal litigation, employment, family & matrimonial, immigration, insolvency & restructuring, insurance & personal injury, intellectual property & technology, litigation & dispute resolution, notary public services, property, securities, futures & funds, shipping & logistics, trust, and wills & probate.ONC Lawyers is a member of the International Society of Primerus Law Firms.