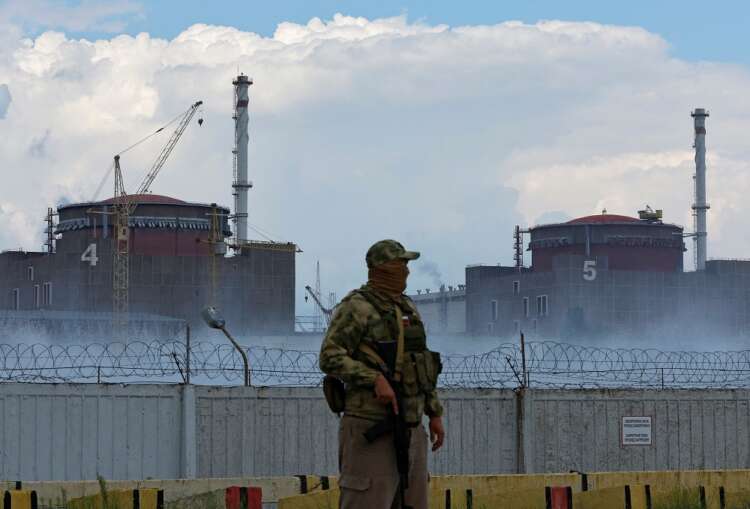 LONDON (Reuters) – Russia’s defence ministry on Friday accused Ukrainian forces of shelling the Zaporizhzhia nuclear power plant, the biggest in Europe, saying a leak of radiation had been avoided only by luck.

It said that as a result, the generating capacity of one unit had been reduced and power supply to another had been cut. In addition, the nearby city of Enerhodar was suffering from problems with its power and water supplies, it added in a statement.

“Fortunately, the Ukrainian shells did not hit the oil and fuel facility and the oxygen plant nearby, thus avoiding a larger fire and a possible radiation accident,” it said.

Ukraine’s state nuclear power company, Energoatom, earlier said Russia had shelled the plant, but that it was still operational and no radioactive discharges had been detected. Two of the six reactors are still operating.

“The possible consequences of hitting an operating reactor are equivalent to the use of an atomic bomb,” Ukraine’s foreign ministry said on Twitter, accusing Russia of resorting to “numerous provocations” at the plant.

The Russian-installed administration of Enerhodar said on Friday that power lines at the plant had been cut by a Ukrainian artillery strike. The facility continues to be run by its Ukrainian technicians.

Enerhodar and the nearby nuclear plant were seized by invading Russian troops in early March, and are still close to the frontline.

U.S. Secretary of State Antony Blinken on Monday accused Moscow of using the plant as a shield for its forces, and Ukraine has accused Russia of shelling its positions from positions near the power station.

A Russian-installed official in Ukraine said on Wednesday, however, that Ukrainian forces had repeatedly attacked the plant with Western munitions.

Reuters was unable to verify the battlefield reports.

Rafael Grossi, head of the International Atomic Energy Agency, said this week that contact with the plant was “fragile” and communications did not function every day. He appealed for access to determine whether it was a source of danger.