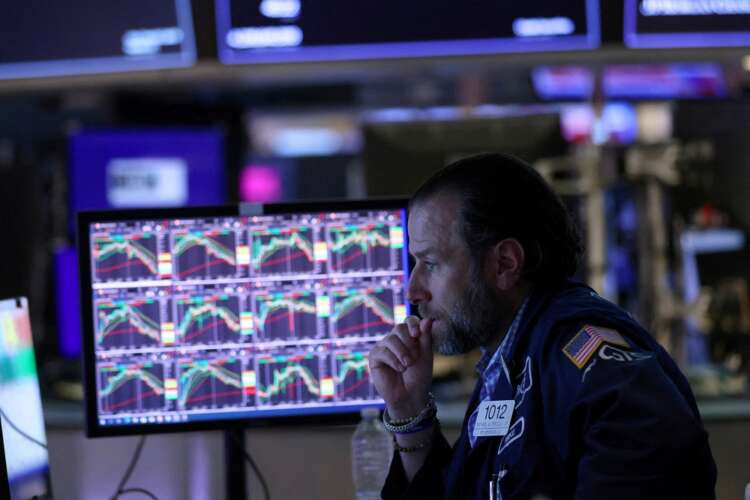 A look at the day ahead in markets from Sujata Rao

Minutes from the Fed’s last meeting indicated the U.S. central bank is not yet contemplating bigger, 75 basis-point rate rises. That, alongside softer economic dataprints, is inducing money markets to keep dialling back their view of where the Fed funds rate may peak.

The implied yield on the eurodollar futures June 2023 contract — essentially where markets see interest rates to be at that point — is down some 80 basis points this month. And the September 2023 implied yield has fallen below 3% for the first time since February. 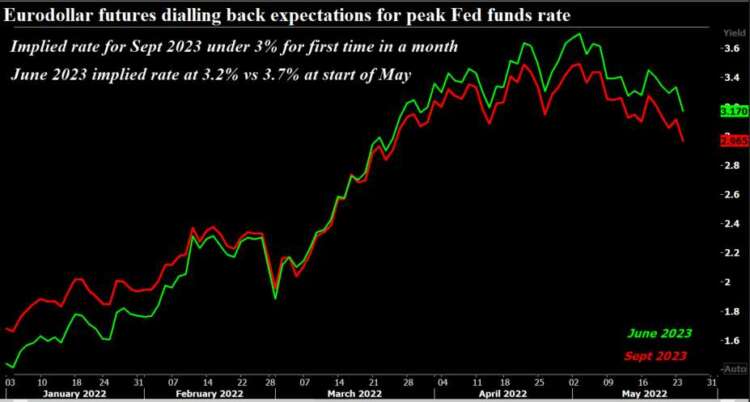 <RCItemMarker xmlns=”http://CoreService.Lynx.ThomsonReuters.com/2009/03/02/Schemas”>c25766e8-21e8-43da-8bf4-65a87fc0db651</RCItemMarker>JPMorgan notes too that global inflation (ex-Turkey) slowed in April to half the 1.2% month-on-month record set in March. Yet, policymakers are not convinced; South Korea delivered a quarter-point interest rate rise on Thursday and flagged more ahead, hot on the heels of an aggressive move in New Zealand a day earlier.

A retreat in U.S. Treasury yields — 10-year borrowing costs are at mid-April lows — has offered some encouragement to stock markets, with European markets gaining and futures tipping a firmer Wall Street open.

But the mood remains lacklustre. Is recession the explanation?

The Institute of International Finance reckons so, halving 2022 global growth forecasts to 2.3%. That amounts essentially to a recession call, once population growth is accounted for.

Prices for oil and industrial metals, normally reliable recession barometers, are distorted by supply shortfalls — millions of barrels of Russian oil are off the market and copper is experiencing significant deficits.

Key developments that should provide more direction to markets on Thursday: