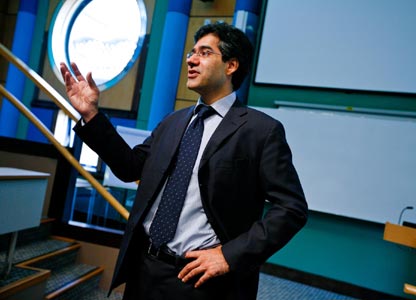 By the manner in which they managed to weather the global financial crisis and outperform conventional banks, the stability of Islamic banks has triggered a lively debate on the nature of the conventional system overall and the risks it entails.

Islamic finance represents one of the fastest growth fields in global finance – since 2006, the asset base has grown by 150% and is forecast to reach $1.8 trillion this year. Given the stability that Islamic banks offer, and the strict constraints under which they function, this is a tremendous achievement. Going forward, the growth rate is likely to remain steady while opportunities will multiply. Above all, the sector is likely to avoid the crises that have become the norm in conventional finance. So what is it that makes the sector so socially desirable and stable? It comes down to three key features:

1. It disallows interest, or ‘riba’
In Islamic finance, one must work for profits, and simply lending money to someone who needs it does not count as work. Under Islamic law, money must not be allowed to create more money. Instead, a bank must provide some service to ‘earn’ its profits. Thus, instead of traditional accounts with given interest rates, Islamic banks offer accounts which offer profit/loss, with the bank purchasing assets with your money which generate returns. In particular, charging high interest rates to someone in need is considered unscrupulous, leaving no space for business models like Wonga.com’s.

2. No room for speculation
The second thing not allowed in Islamic finance is ‘gharar’ or high degrees of uncertainty. All possible risks must be identified to investors, and all relevant information disclosed. Islamic finance prohibits the selling of something one does not own, since that introduces the risk of its unavailability later on. This rules out investments in conventional derivatives, which require speculation about the future subject to excessive risks. This is also the key reason why Islamic banks survived 2007 unscathed (no exposure to derivatives).

3. Keeping it moral
Finally Islamic finance requires that you only invest in ethical causes or projects. Anything unethical or socially irresponsible, from weapons to gambling or adult entertainment cannot be invested in. This produces a very strong alignment between Islamic investments and socially responsible funds.

There are thus very strict constraints that Islamic finance puts on the conventional finance model which of course is irrespective of the profit potential.

Weathering the financial crisis
The fact that Islamic finance weathered the storm so well during the crisis (although later, when the financial economy led to the collapse of the real economy, Islamic banks also suffered along with everyone else) was essentially due to Islamic finance’s prohibition of investment into speculative instruments, that later turned into toxic assets for the conventional banking system. Combined with excessive leverage, conventional banks were left with excessive risk which Islamic banks stayed away from. Several analysts (including the IMF) highlighted Islamic finance as an alternative model that avoids the risks that conventional finance exposes us to and discourages socially irresponsible investments.

Growth rate
Although the modern Islamic banking movement originates from around the 1950s, it really started to develop in the mid-1970s following the 1973 oil crises. Then during the 1990s, Islamic institutions flourished by becoming more and more innovative and developing more complex mechanisms and structures to meet the demands of modern day business. As regulatory regimes in an increasing number of countries developed mechanisms to regulate Islamic finance, products became more standardised and the segment grew rapidly.

This is further driven by a wider realisation of the crucial vulnerabilities of conventional finance, which brought the global economy to its knees in 2007. There are many who flocked to Islamic banks during the crisis and the challenge for the latter now is retaining these consumers.

Finally, Islamic banks have become a key source of investment into large infrastructural projects around the world, through Islamic bonds (sukuks) and other instruments.

Shaping the future of the economy
The financial crisis has caused people and organisations to look for an alternative, and a focus on the Islamic finance model can offer food for thought here. At the same time, familiarity with the competitive dynamics of this rapidly growing sector can open up myriad possibilities for all stakeholders in the global economy.

The Cambridge Judge Business School Executive Education Islamic finance programme is one such course that can aid this process.

The two-day programme will be hosted in Cambridge, Dubai, and London and will provide an introduction to Islamic finance and banking whilst also covering the whole product profile in Islamic finance. It will also talk about various models and strategy and innovation in the context of Islamic markets.

REACHING FOR YOUR WALLET