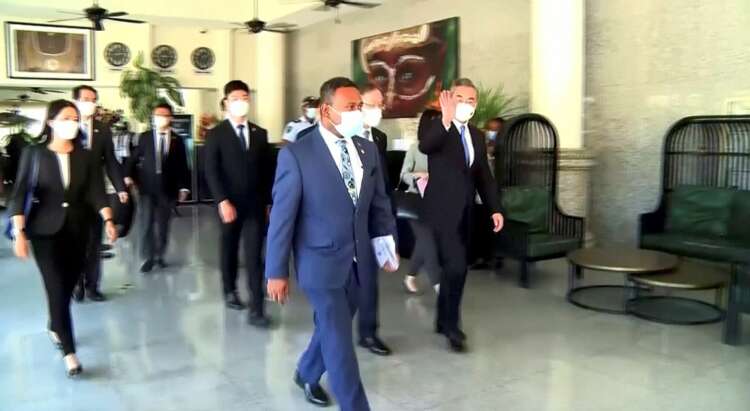 SYDNEY (Reuters) -China’s foreign minister Wang Yi stopped over in Kiribati on Friday, visiting the remote island nation as part of a Pacific tour that Beijing hopes will lay ground for a regional trade and security pact, alarming the United States and its allies.

Wang met with his counterpart and Kiribati president, Taneti Maamau, for discussions on fisheries, education and health, during the four-hour stop.

But most of the large Chinese delegation traveling with him remained at the airport, a Kiribati official said, due to COVID restrictions in the tiny nation which has a population of 120,000 spread over 33 islands.

Wang had come straight from Honiara, the capital of the Solomon Islands, which had been the first stop on his tour.

The Solomon Islands recently signed a security pact with China despite objections from Australia, the United States, Japan and New Zealand, which fear it could give China a military presence in the region.

Kiribati was focused on trade and tourism opportunities with China, and wasn’t keen on a security arrangement, according to a Kiribati official, who was not authorised to speak to media.

The official said a controversial plan to reopen a protected marine zone for fishing, and to upgrade an airstrip on Canton island, weren’t among agreements due to be signed.

Since switching diplomatic recognition from Taiwan to Beijing in 2019, Kiribati has said it would open one of the world’s largest marine conservation zones to fishing, the 400,000 square kilometre Phoenix Islands Protected Area.

Kiribati lawmakers told Reuters last year it would also consider a Chinese plan to upgrade a disused World War Two airstrip, which Western critics said would offer Beijing a foothold about 3,000km (1,860 miles) southwest of the U.S. state of Hawaii. Kiribati said it would be a non-military project designed to bolster tourism.

The Global Times, an English language tabloid published by the ruling Communist Party’s official People’s Daily, reported that a roadmap for infrastructure construction under China’s Belt and Road Initiative was signed, as well as cooperation agreements on trade, renewable energy and customs inspection.

The Kiribati government said it would release details of the visit later.

Wang will host a meeting of Pacific foreign ministers in Fiji next week, where China will seek agreement on a sweeping trade, fisheries and security pact.

A draft communique and five-year action plan sent by China to 10 Pacific islands ahead of the meeting has prompted opposition from at least one of the invited nations, Federated States of Micronesia.

China and Australia’s top diplomats are on competing visits to the Pacific islands.

Wong told reporters she had traveled to Fiji days after being sworn in to show the priority being given to the Pacific and climate change by the new Australian government.

Fiji on Friday joined U.S. President Joe Biden’s Indo-Pacific Economic Framework (IPEF), making it the first Pacific Island country in the plan that is part of a U.S. effort to push back on China’s growing regional influence.

When asked about Fiji signing up to IPEF, Chinese foreign ministry spokesman Wang Wenbin told reporters in Beijing on Friday the Asia-Pacific “should not become a geo-political chessboard”.

Australia’s Wong warned that there were regional consequences to the Solomon Islands’ security pact with China, after her Chinese counterpart said interference in the deal would fail and China’s relations with Honiara were a model for the region.

“The world has changed, there is a lot more strategic competition,” she said.