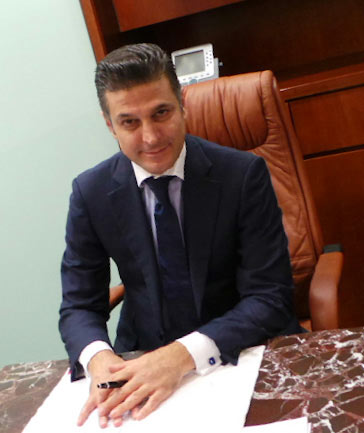 Back in the early nineties Korosh Farazad, started his first job as an investment banker for a small cap IPO company, based in New York and Maryland. He was an ambitious stock broker trainee, learning from the giants in the market, at that time, such as his boss Gordon Belford. He took an immediate interest and understanding, into markets and the trading of small cap IPO’s. After several years of working in the US markets, he had both the confidence and skill set to take a chance on his own. In 1996 he founded Farazad Oil Company Inc., Farazad, the Chairman and CEO (FII), began his business financing in oil wells in Mississippi and Louisiana.

That business grew significantly during 2003, and expanded into buy/sell of Prime Bank Instruments and buy/sell of crude oil, in cooperation with many of the World’s Leading Financial Institutions and Oil Suppliers.
By 2005, Mr. Farazad had the ability to establish credit lines with various banks against large volume Bank Guarantees and Standby Letters of Credit expanding the Company’s ability to provide in-house financing to small cap companies.

For those that are unfamiliar with Structured Finance can you provide brief overview of the types of services available?
Structured finance is a sector of finance created to help provide increased liquidity or funding sources to markets like housing, real estate development, oil exploration and development, etc. and/or to transfer risk to buyers of structured products. Liquidity and risk transfer is typically achieved in structured finance through securitization of various financial assets (e.g. mortgages, credit card receivables, auto loans, etc.) which has helped to open up new sources of financing to consumers and businesses for development and refinancing of various sector to consolidate debt.  Securitization include collateralized debt obligations (CDOs) and asset-backed securities (ABS). The legal structure of these instruments can be quite simple or very complex subject to regulations of Domicile Country where the loan is given.

What role is structured finance playing in the current economic situation?
As Institutional Lenders are not lending as much as they were prior to the 2008 Worldwide crises, Private Lenders are attracted in providing debt under a structured financing scheme, which has less red tape and not as regulated with the various Investment and Credit Committees within the Institutional Lending arena.  Furthermore, the protection for a Private Investor would have the same components in terms of first charge on the assets in case of default and any additional securities to minimize the possibility of default on the loan funded to the Borrower.

What initiatives or strategies have led to Farazad Investments Inc. success in structured finance?
Farazad Investments unconventional approach to financing, gave the company an edge to better understand the challenges of the economic climate over the last few years, and from this understanding it has founded a way to secure funding for the Borrower under a less conventional practise and given the investor maximum security to lend under an unconventional scheme.

How does your Credit Enhancement program work?
Credit enhancement is a traditional technique to improve the credit profile of a transaction. It is a necessary step in securitizing debt funding and for a borrower to have the ability to service the debt during the term of the capital injection, for a particular transaction. Any sector which FII approves to fund under the Credit Enhancement scheme, can be used in the form of a debt injection or Capital Investments, by providing physical cash injection to the Borrower’s project in form of Equity that can be repaid under a debt structured scheme. The collateral of such Credit Enhancement is usually a first charge to the project (i.e. tangible assets and future receivables and in special cases, other forms of collateral).

What markets does Farazad Investments Inc. currently operate in and do you have any future plans of expansion?

FII currently operates across five continents, with offices in the United States, Europe, Middle East, Asia Pacific and Australia. FII’s short-term future plans are to continue moderate growth. FII will further facilitate and develop the current structure in the regional offices. It is envisaged to open a registered office in London UK, within the next 18 months.

What impact if any has regulatory compliance had on business?
Regulatory Compliance is being heavily adopted by all reputable organizations, practices such as KYC checks and anti-money laundering practices are all common terminology in today’s business language. This has had a positive impact on business transactions, as it assists lenders to know where their funds are and who the receiver is, avoiding bad practices, which may have been over looked in past. FII fully supports regulated practices and complies with all the regulated bodies Internationally, ensuring all transactions are fully compliant. We conduct internal due diligence on all transactions, along with detailed KYC checks.