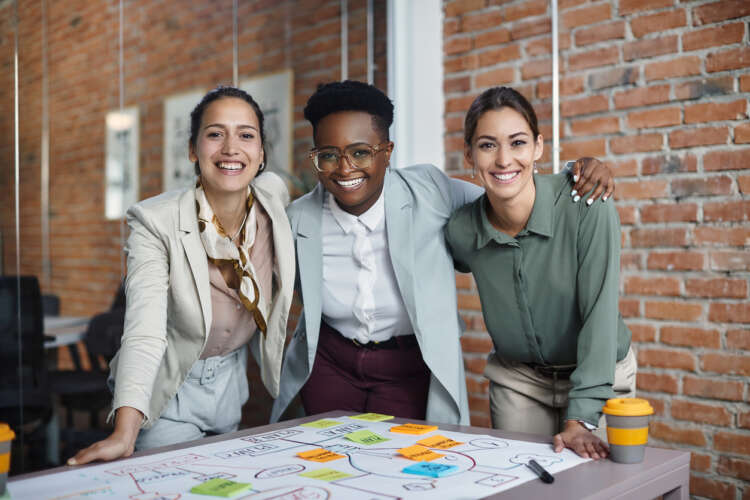 Starting in the early 20th century, International Women’s Day was traditionally a day of strikes and protests as women in Europe fought for shorter working hours, better pay and the right to vote. Now, thankfully things have come a long way since the first official celebration in 1911, but there is still much to be done in the fight for gender equality.

This International Women’s Day, Global Banking and Finance spoke to nine industry leaders to get their insight and advice on what more can be done to welcome and keep women in the workplace.

Opening up the workplace

“Shockingly, while women make up 49% of the UK workforce, only 19% of tech workers are women,” highlights Dominique Fougerat – EVP People & Culture at Axway. “And despite a bright light being shed on these diversity gaps, and a number of initiatives trying to drive real changes, a recent report into gender diversity showed that, based on the current rate of progress, it will take another 100 years to achieve gender equality. The change remains too slow. The world needs meaningful changes now. Creating a more female-friendly tech industry will require fundamental changes at the level of companies and employers, but also within the education system and the underlying assumptions and biases that are still prevalent in society today.”

Lucy Zhang, Senior Digital Designer at Plutora furthers this, “Most people can agree that the idea that women are better suited for certain types of work is outdated, but this notion still permeates society and is difficult to tackle head-on. It’s important to support STEM activities designed to get girls interested in tech at an early age. Female mentorship, role models, and leaders are also crucial for giving women that voice and sense of belonging in the space.

“The American activist Marian Wright Edelman said, ‘You can’t be what you can’t see.’ Women are self-selecting out of tech due to a lack of role models in the space. We need access and exposure to tech programmes at an early age, fostering a community where girls can feel comfortable and empowered to pursue a future in tech.”

Women have lots to offer any workplace that they may wish to enter, but for the technology industry, they are still significantly underrepresented. “In the UK, every industry and business can greatly benefit from gender diversity, especially ones which have traditionally been seen as male-dominated, such as science and technology, but there are significant barriers to break down,” explains Gillian Mahon, Chief People and Places Officer at Totalmobile. “For example, women not only face obstacles such as earning equal pay, but they are also disproportionately affected by new challenges, such as hybrid working. Recent research from Gartner demonstrated that women were one of the few groups unfairly disadvantaged by remote work.

“Despite the challenges, there are so many things that organisations can do to promote equality in the workplace. Some practical steps that can be taken include: introducing flexible working hours to aid working parents, involving women in the recruitment process, supporting pay transparency and encouraging female role models by intentionally appointing highly qualified women to your executive team.”

Svenja De Vos, CTO, Leaseweb Global continues, “in 2021, Deloitte Global predicted that large global technology firms, on average, will reach nearly 33% overall female representation in their workforces in 2022. While these statistics paint a rosy picture of the progress to minimize the gender gap, we still have some work to do. With this year’s theme for International Women’s Day being, “Break the Bias,” I think it is critical for women already in the technology field to express their enthusiasm for a career in the industry. After all, if we don’t, how can we expect more women to be encouraged to be involved?

“It is of the utmost importance that we teach young girls that women are successful in the technological realm. Despite the fact that there has been an influx of women joining the tech workforce in recent years, being a female manager in the tech world is still considered ‘abnormal.’ I encourage women who are leaders in the industry to speak about their experiences to the younger generation to entice young people to get them excited about a technical education or career.”

The technology industry is not the only sector that is lacking female representation however, industries such as finance and transportation are also lagging behind. “The financial industry is notoriously male-dominated, and businesses still face considerable challenges recruiting and retaining female talent,” details Hugh Scantlebury, CEO and Founder of Aqilla. “The good news is we have seen improvements in recent years. In fact, women now make up 43% of the UK’s financial services workforce. While this is a move in the right direction, the gender gap in leadership roles is more concerning. Only 15.1% of CFOs are women, so businesses and industry bodies need to fully invest in the potential that women have in this profession.

“Career progression is key to encouraging and supporting the next generation. There is a clear need for more senior female role models and having just a few female leaders won’t inspire younger women to enter our industry. This International Women’s Day, we should take action to push for gender equality throughout all levels of financial businesses.”

Kathy Gormley, Principle Solutions Engineer at Resistant AI furthers this point, “While the number of women entering traditionally male-dominated industries such as finance and technology has increased, there’s still a lot of work to do to level the playing field. There’s something powerful about seeing women succeed in these roles because it can give other women a sense of visibility and a push of confidence. It validates and reinforces the idea that they, too, can go down this path and #breakthebias.”

“With this year’s theme being #BreakTheBias, we must turn our attention to the public transportation industry, which has quietly been influenced by widespread bias for much of its existence,” adds Krishna Desai, Senior Global Marketing Manager at Cubic Transportation Systems.  “It’s a sector that in many ways is still stuck in a past when men took the bus or train to work while women stayed home to tend to their houses and families. Now, women are getting educations, pursuing careers and using public transportation as much in their daily lives as anyone else, yet they’re dealing with a system  not designed for them.”

Representation is vitally important to get women interested in entering male-dominated workplaces, however it is also vital that businesses work to make practical improvements. Branka Subotic, Principal Data Consultant, Ascent suggests, “on International Womens Day, we all need to invest in the next generation: in my opinion, talking about diversity to university students is too little too late. We need to engage with young people early on and educate them in the ‘art of the possible’ when it comes to their future life – both personal and professional. This means encouraging them to meet and engage with people from different cultures and backgrounds, and present them with really interesting applied sciences courses and jobs within STEM. This combined approach will inspire them to consider different career paths and prospects.”

Oylum Tagmac, Senior Director, Worldwide Alliances at Commvault continues, “Mentoring is another key area: Seeing is believing and having a mentor is great way to tap into knowledge and expertise. I have been very lucky to have great mentors to date and I also try to do the same by mentoring others. Equally important is to enable an inclusive workplace and create an environment where every voice is heard and valued. One important dimension is the culture; if you don’t understand the biases that exist, then it makes it very hard to nurture a diverse and inclusive workplace. One of the most influential woman I worked with used to say: diversity is the strategy, but inclusion is the goal!”

There is also a lot to be said for promoting women in leadership roles. “Organisations should be striving for more diversity among their senior leadership and Board,” says Bruce Martin – CFO at Tax Systems. “The more diverse the people in the room, the more varied the thinking, which will increase creativity and innovation, and better the results. In fact, a study by McKinsey found that for every 10% increase in gender diversity, EBIT rose by 3.5%. Diversity matters. Workforces perform better in a more inclusive environment. Organisations need to open their businesses up to the large diverse talent pool that is too often overlooked – the part time workers, which statistically are more likely to be women. Challenging the traditional 9 to 5 / 5 days a week approach is one way to achieve this.”

Britain to phase out Russian oil imports by end of 2022