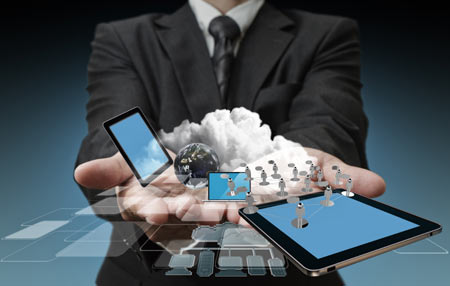 Last month, Apple and IBM announced a deal that was widely acknowledged as a shrewd move by Apple to gain deeper traction in the enterprise space. The partnership is also a win for IBM as the tie-up will likely accelerate their capability in enterprise mobility at a faster rate than the organic pace of Bring-Your-Own-Device (BYOD) growth.

IBM will sell the Apple devices loaded with applications for business users and Apple will handle telephone support with new AppleCare options that are specifically crafted for enterprises.  The tie-up was seen by analysts as a direct challenge for customers that use BlackBerry’s enterprise services, the current leaders in the enterprise mobility market. IBM is planning more than 100 apps targeting industries such as retail, healthcare, banking, travel, transportation and telecommunications, with a focus on security and mobile device management.

The astonishing thing in all of this is if you go back five years or more, you never would have thought of Apple and IBM as natural bedfellows. Consider Apple, its persona, culture and image and contrast that with IBM – the two couldn’t be more different. Yet when you look at how both organisations are currently positioned then there’s a lot of logic in the partnership – and a great deal of power.  You’ve got Apple, a really strong player in the consumer market and fantastically adept at reaching out to that sector of the marketplace with brilliantly well designed front end systems (and amazing promotional reach), coupled with IBM’s strength in enterprise level computing and powerful processes, infrastructure, data services and backend systems.

Above all, this is likely to be a genuine game changer; in spite of the Microsoft/Nokia tie-up, Android’s penetration of the corporate market and Blackberry’s dominance in this space, it would appear to be the first end-to-end enterprise offering that organisations will really relish – combining the end user’s choice of mobile technology with the CIO’s choice of enterprise platform. As such, this new partnership has the potential to revolutionise the way that enterprises operate.  Employees will no longer have to lug a company laptop around. Instead, they will bring their iPad or iPhone into meetings.  In fact, the true genius of the partnership is how it has the potential to transform millions of “BYOD” iOS devices into a viable platform for hosting apps within the enterprise.  Seemingly, the alliance is a marriage made in heaven – what could possibly go wrong?

Well, in the short-term, it will be a minefield for the CIO and the IT department, if they choose to go down this route. Many organisations will have to completely rethink their mobile strategy and how to replace the BYOD phenomenon that has caused the IT department considerable headaches already, but has been gaining traction.  CIOs across all organisations have been wrestling with the problem that everyone wants to use the device in their pocket to access company data, applications and processes. In spite of increasing BYOD adoption, up until now there hasn’t been an easy solution for secure, scalable and flexible mobile device usage within enterprises. And while the Apple-IBM strategic alliance certainly has the potential to deliver significant benefits for businesses, it will also drive significant change and upheaval.

The question is how will the CIO office facilitate that change?  What policy decisions will need to be made? Most enterprises operate in a Windows desktop and laptop world and running an Apple iOS platform alongside this will create new technical challenges.  Will such change derive additional value when the extra cost and time to move to a whole new mobile environment is taken into account?  These are just some of the considerations that the CIO will need to address.

Perhaps, most importantly, organisations should not underestimate the size and complexity of the task and the impact that will be felt by the business as a result. Given the ubiquity of Apple devices in the consumer market place it will be easy to expect a seamless and quick adoption with minimum disruption; such expectation should be viewed with scepticism. Over the years I’ve witnessed many technology change projects and programmes where the organisations involved have seriously underestimated their readiness to make the changes they have committed to.  Many organisations looking at the Apple-IBM alliance may not have even fully developed their current mobile strategy and under these circumstances it is highly unlikely that moving to the new platform will deliver the outcomes and benefits that were promised in the business case.

That said there certainly appears to be a lot of well documented reasons for an organisation to consider adopting an Apple-IBM solution, with many industry commentators claiming that the new partnership will indeed transform enterprise mobility. Whether this is true or not, we can be sure of one thing, this announcement is set to disrupt the market and it will be very interesting to see how this partnership between two of the world’s global technology giants evolves.

Irrespective of whether you believe the Apple-IBM alliance will be a game changer, the adoption of enterprise mobility solutions is starting to gain traction and the success or failure of new enterprise mobility initiatives will still depend on how well prepared the organisation is for change.  Mobile projects and programmes are no different to any other change initiative; they need careful planning, management and effective stakeholder communication in order to achieve the end goal and the business benefits. So whilst it might appear that there are many advantages to be gained, the CIO must ensure that the organisation has thought through its requirements, that the business is capable of moving to the new mobile platform, that there is a thorough understanding of cost and how long it might take, and that there is buy-in from all employees and major stakeholders around the business.   Otherwise, in spite of the industry hype and apparent strength of the combined offering, the delivery might fall short of expectation and not deliver the great ‘Apple-IBM’ promise that enterprises think they are buying.