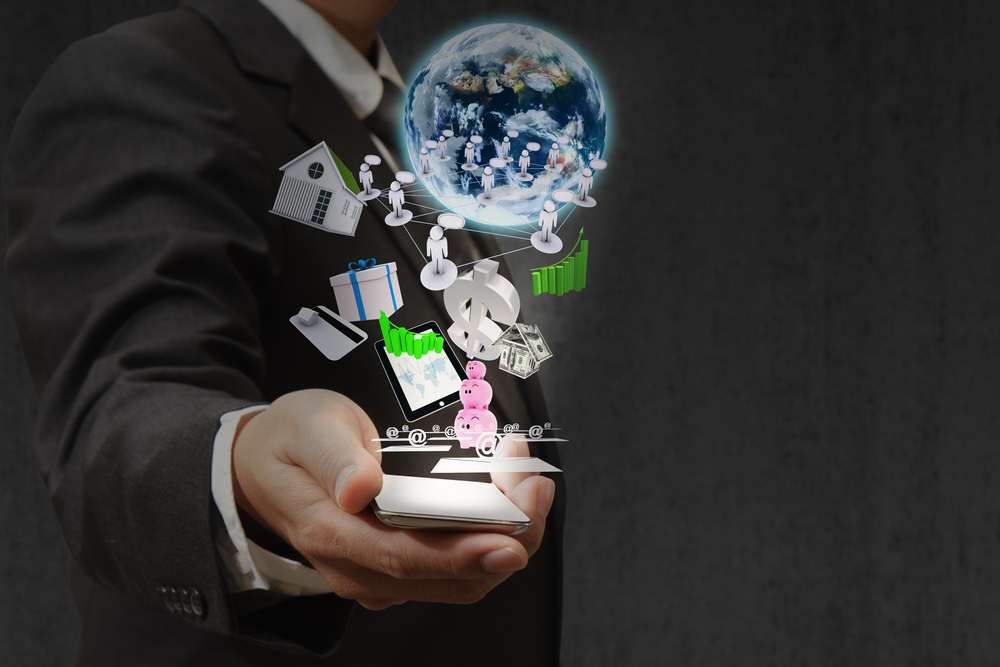 The trade tariffs – and corresponding retaliatory measures – implemented are so far limited. In total, the value of affected trade now amounts to about $150bn globally, or 0.8% of overall world exports. However, adding up all the measures currently under discussion and assuming impacted countries retaliate commensurately, the amount of targeted trade could quickly rise to more than $1tn, or 6% of global exports. In her latest Ahead of the Curve, Silvia Dall’Angelo, Senior Economist at Hermes Investment Management, argues an escalation of protectionist measures evolving into a trade war could represent the biggest challenge to the world economy.

A fully fledged trade war would act as a supply shock, resulting in lower global output and temporarily higher inflation. According to recent estimates[1], an out-and-out trade war would result in a 2-3% reduction of world GDP in the next few years.

In particular, the Organisation for Economic Cooperation and Development (OECD) estimated a 10-percentage point increase in trade costs – due to higher generalised tariffs – would reduce global output by 1.5% over the coming years[2].

The OECD scenario does not seem far-fetched. Assuming all measures under discussion are implemented, US duties as a share of import value would increase from the current level of 1.4% to almost 5%.

A warning from history

This would be well below levels recorded in the early 1930s, when US duties surged to 20% as a share of the overall import value and 59% of dutiable imports, following the introduction of the 1930 Smoot-Hawley Act. However, US duties as a share of the import value would likely increase to levels last seen in the early 1970s. In addition, given that retaliation would likely follow, the move would be largely mirrored at a global level.

US tariffs could increase to a 40-year high 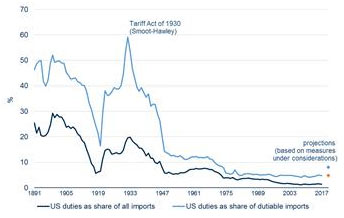 Source: US International Trade Commission as at 2017 and Hermes’ estimates as at July 2018

Importantly, macroeconomic models probably underestimate the impact from higher tariffs and protectionist threats. In particular, they focus on the direct effects from trade limitations on trade flows and import costs, while they underplay indirect effects from uncertainty and tighter financial conditions.

Persistent trade threats point to protracted uncertainty on trade arrangements, which can weigh on business decisions about investment and hiring, via the confidence channel. It is possible these effects have already played out to some extent, which would partially explain the divergence in growth between the US and the rest of the world in the first half of 2018.

Trade tensions have had no impact on the US economy so far, but the trade offensive could backfire. US growth is set to accelerate to about 3% in 2018, up from 2.2% in 2017, reflecting the boost from fiscal stimulus. However, the outlook for 2019 is more uncertain: an escalation of trade measures – driven by the US administration – has the potential to backfire, more than offsetting the positive impact from fiscal stimulus in 2019.

Meanwhile, the implications of a trade war on monetary policy are ambiguous. Central banks would need to set policies to balance the trade-off between reining in higher inflation and supporting faltering growth. Policy rates would likely stay close to the floor, implying the ‘loose for longer’ policy probably has years left to run.

Trade tensions have some broader long-term consequences that are hard to quantify. First, trade openness is typically associated with enhanced efficiency and, therefore, higher productivity. The increased integration of global supply chains in the last few decades has probably intensified this link. De-globalisation would put this process in reverse and the unwinding of efficiency-enhancing supply chains would likely have a negative impact on living standards by depressing productivity in the long term.

The situation might need to get worse before it can get better. Trade tensions are likely to persist in the run-up to the US mid-term elections in November. So far, the anti-trade rhetoric aired by the US administration has paid off in terms of political capital, but the strategy may be nearing its boundaries. First, because the additional measures would increasingly impact the US consumer, there should be a limit to which these threatened targets are translated into actions.

Second, and more importantly, the Trump administration may be pursuing a trade deal with China, which would be presented to the American public as a win before the mid-terms. However, the acrimonious exchanges between the US and China in recent weeks suggest scope for further negotiations has become more constrained. In turn, this implies the risk of a policy accident in the coming months remains high.

Share on FacebookShare on TwitterShare on Linkedin
Related Topics:De-globalisationEconomic Cooperation and DevelopmentEscalating trade warworld economy
Up Next

CSDR: how penalties and mandatory buy-ins will hit banks