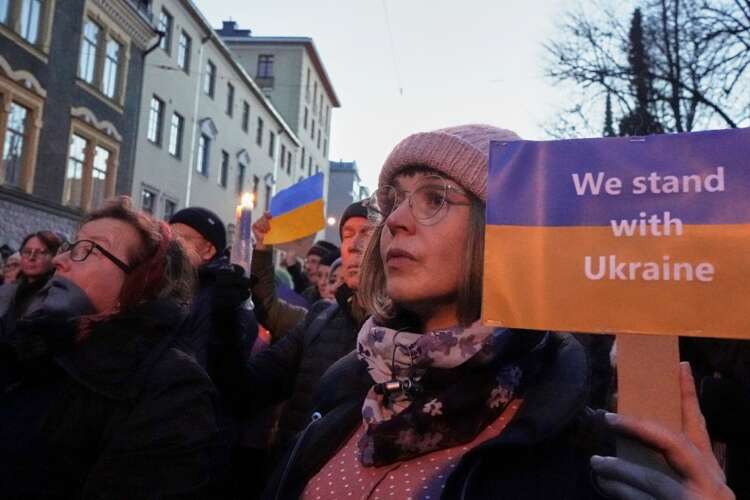 By Anne Kauranen and Essi Lehto

HELSINKI (Reuters) – Russia’s invasion of Ukraine is causing a rapidly growing number of Finns to support membership of NATO, suggesting the country’s delicate balancing act between the Kremlin and the U.S.-led military alliance could be coming to an end.

Many Finns have traditionally been wary of Russia, with which their Nordic country shares a 1,340 km (833 miles) border and a history of two wars between 1939 and 1944 which cost Finland substantial territory.

But for years public backing for joining the North Atlantic Treaty Organisation lingered at only about 20 percent, although it briefly edged up in 2014 after Russia’s annexation of Crimea.

In the wake of Russia’s Feb. 24 invasion of Ukraine, Finnish diffidence towards the alliance appears to be dissolving.

“Unfortunately these events have shown that we cannot be lulled into thinking the world is a good place and that we do not have to be afraid,” Mirja Uosukainen, a health professional, told Reuters at a protest outside the Russian embassy in Helsinki.

Uosukainen didn’t previously see a need for a defence alliance, but now said she had begun to think her country should quickly consider joining the NATO.

Finnish willingness to join NATO has soared in just a month. A poll by public broadcaster Yle last Monday had 53% of Finns in favour of joining, when the corresponding figure in a poll by Helsingin Sanomat newspaper was 28% in late January.

“Now it of course needs to be weighed more carefully how we do it, but we certainly need to move to that direction,” said Timo Hoikka, an entrepreneur on his way to a meeting.

He added he had long been pro NATO and now felt it was more important than ever due to the “expansionary” neighbour.

Within a week, two official citizens’ initiatives collected more than 50,000 signatures needed for them to be discussed in parliament.

The head of the Finnish Institute of International Affairs, Mika Aaltola, described Russia’s attack on Ukraine as “Europe’s 9/11 for Finns” and said the impact was seen in Finns changing their mind about NATO.

“This has happened across the political spectrum and the change is seismic,” Aaltola told Reuters.

Seeking to calm the haste to join, the government has said possible NATO membership should be debated in parliament before any conclusions can be drawn.

“Our current position is that the non-alignment and very close cooperation with Nato has been serving us well (…) and then we should after the crisis look at what our judgement is,” Foreign Minister Pekka Haavisto told Reuters.

In April next year, Finns will vote in a general election and the largest opposition group the National Coalition, a frontrunner in polls, is convinced Finland should join.

“The National Coalition has long been in favour of NATO membership and our goal is to join the NATO for real,” party leader Petteri Orpo told Reuters, adding it would need other parties to join their cause.

Finland, which was first part of the Swedish kingdom until 1809 and then under Russia’s control until gaining independence in 1917, has long considered itself a northern shield for European freedom against its unpredictable eastern neighbour.

During World War Two, Finland fought back an invasion by Russia, keeping its independence, and has since tried to preserve friendly relations with Moscow, opting to stay out of NATO to avoid conflict.

“Now that the relation with Russia has collapsed and there is a total wreck of confidence, Finns turn their gaze towards the other direction, which is NATO,” Aaltola said.

Finland and Sweden have long stood together in their refusal to join the alliance, but now support for membership has risen in Sweden too, albeit less dramatically than in Finland.

Finland has yet to decide what minimum majority would be needed for any parliamentary vote to join NATO, or whether, as President Sauli Niinisto has suggested, a referendum would be more appropriate.

“If there is a referendum, then I think people should have more information so that they don’t just think that (Nato) will guarantee our security,” said Merja Heimonen, who is undecided for NATO and fears for her sons in case of a crisis.

(Reporting by Anne Kauranen and Essi Lehto in Helsinki, additional reporting by Johan Ahlander in Stockholm)