British PM Rishi Sunak pledges further action on strikes to 'protect lives'
Our website publishes news, press releases, opinion and advertorials on various financial organizations, products and services which are commissioned from various Companies, Organizations, PR agencies, Bloggers etc. These commissioned articles are commercial in nature. This is not to be considered as financial advice and should be considered only for information purposes. It does not reflect the views or opinion of our website and is not to be considered an endorsement or a recommendation. We cannot guarantee the accuracy or applicability of any information provided with respect to your individual or personal circumstances. Please seek Professional advice from a qualified professional before making any financial decisions. We link to various third-party websites, affiliate sales networks, and to our advertising partners websites. When you view or click on certain links available on our articles, our partners may compensate us for displaying the content to you or make a purchase or fill a form. This will not incur any additional charges to you. To make things simpler for you to identity or distinguish advertised or sponsored articles or links, you may consider all articles or links hosted on our site as a commercial article placement. We will not be responsible for any loss you may suffer as a result of any omission or inaccuracy on the website. 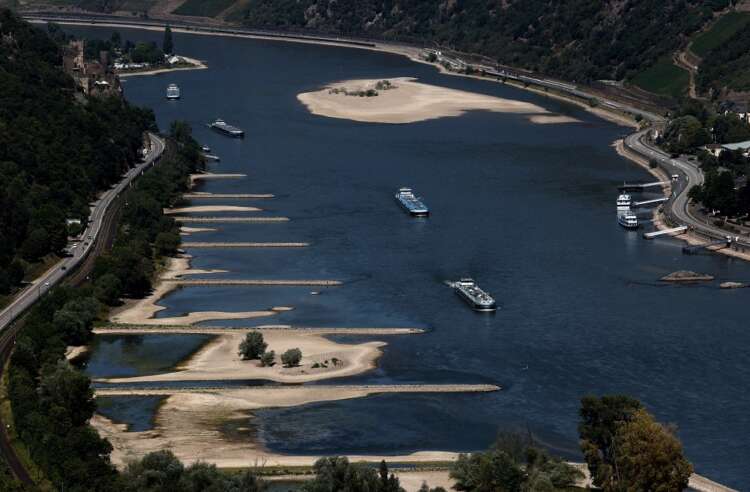 BERLIN (Reuters) – Water levels on the Rhine river are very low because of unusually hot and dry weather, preventing many vessels from navigating the critical European shipping route fully loaded.

Here are some facts about why shipping on the Rhine river is important for the economy:

WHY IS RHINE RIVER SHIPPING IMPORTANT?

Flowing from the Swiss Alps to the North Sea via German industrial heartlands, the Rhine is a major route for products ranging from grains to chemicals and coal.

It is an important link between industrial producers and global export terminals in North Sea ports such as Rotterdam and Amsterdam, while canals and other rivers link the Rhine to the Danube, making it possible to ship to the Black Sea as well.

WHAT HAPPENS WHEN WATER LEVELS ARE LOW?

When water levels fall, cargo vessels have to sail with reduced load to prevent them running aground.

Some shippers have said in recent days they were loading about a quarter of the regular amount of freight onto ships.

This means more ships are needed to move consignments that would normally fit into a single vessel, adding to freight costs. Shipping companies can usually pass on extra costs to cargo owners, who in turn pass on higher costs to customers.

WHAT IS THE CRITICAL WATER LEVEL?

There is no specific water level at which shipping stops, and authorities do not close the river. It is up to vessel owners to decide whether they can operate safely.

WHAT IS THE IMPACT ON GERMANY’S ECONOMY?

Shipping bottlenecks are another drag on the German economy, which is already grappling with high inflation, supply chain disruptions and soaring gas prices after Russia’s invasion of Ukraine in February.

Economists estimate the disruption to Rhine shipping could knock as much as half a percentage point off overall economic growth this year in Europe’s largest economy.

The low Rhine water levels are expected to increase costs for chemicals companies such as BASF and could lead to production cuts.

Coal power plants â€“ now back in fashion as an alternative to Russian gas supplies â€“ also face supply shortages with boats unable to take on enough coal. Utility Uniper has warned of output cuts at two of its plants that make up 4% of Germany’s coal-generated electricity capacity.

WHAT IS BEING DONE TO ALLEVIATE THE SITUATION?

Companies are shipping more goods by truck or train to make up for the shortfall on the Rhine.

Germany plans to give the transportation of materials and equipment essential for energy production priority on the country’s rail networks should low water levels on the Rhine fall further, a draft decree showed on Sunday.

Shipbuilders have also been working on vessel designs that can cope with lower water levels.