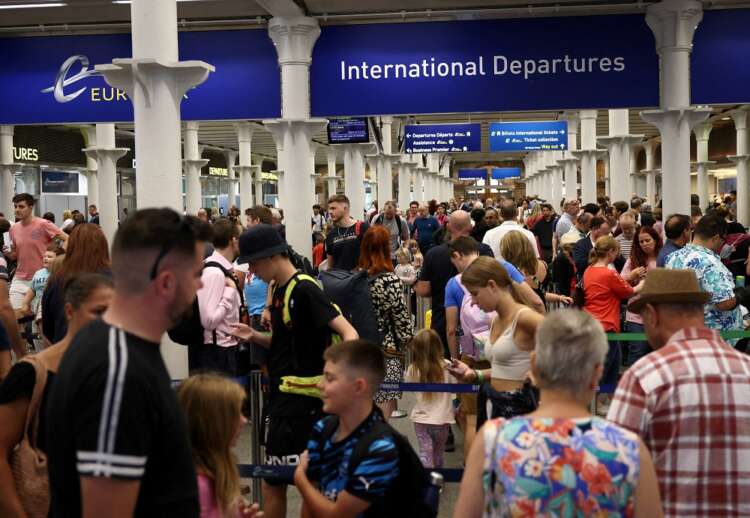 LONDON (Reuters) – Eurostar’s peak capacity in London has fallen by 30% due to post-Brexit checks on travellers using the high-speed rail link between Britain and mainland Europe, the train operator’s boss has said.

New border checks on British citizens introduced after Brexit have caused a “significant increase” in processing times at train stations, Eurostar Chief Executive Jacques Damas told the chair of Britain’s parliamentary committee on transport in a letter published on Tuesday.

Damas was responding to a request from committee chair Huw Merriman seeking details about the closure of Eurostar services at two stations in Kent, in southeastern England.

“As things stand, peak capacity through the stations is c.30% lower than pre-Brexit,” Damas said.

Some 40% of Eurostar’s customers are British citizens and the stamping of British passports by continental police adds “at least 15 seconds” to each passenger’s border crossing time, he added.

London’s St. Pancras train station, with all booths manned, can currently process just 1,500 passengers per hour, compared with 2,200 in 2019 before Britain’s departure from the European Union took effect, Damas said.

“It is only the fact that Eurostar has capacity-limited trains and significantly reduced its timetable from 2019 levels, that we are not seeing daily queues in the centre of London similar to those experienced in the Channel ports,” he said.

Merriman, calling Eurostar “a vital cog in our transport system”, said the committee would contact the rail regulator for interventions to support the train operator, which connects Britain with France, Belgium and the Netherlands.

Labour senses power amid UK financial turmoil, but work to be done

FirstBank CEO on Digitisation, Customer Relations and the Impact of Effective CSR Initiatives