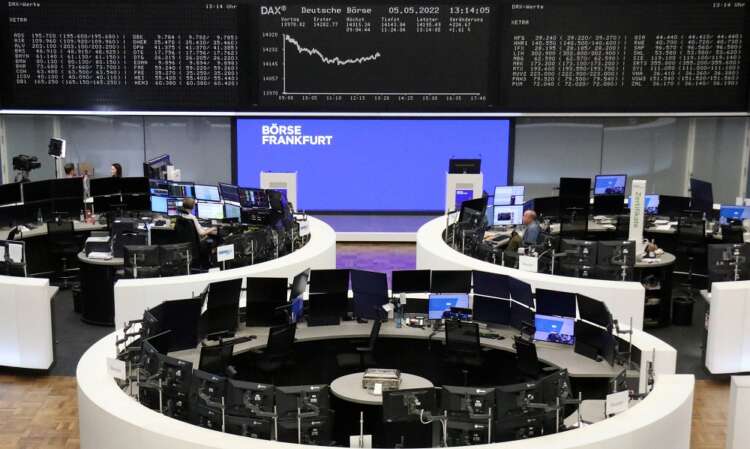 The pan-European STOXX 600 index dropped 1.2% to touch its lowest since March 10.

Tech stocks dropped 2.1% to December 2020 lows as U.S. and European government bond yields surged to multi-year highs on bets for faster interest rate hikes aimed at taming a surge in inflation. [US/] [GVD/EUR]

The European Central Bank should hike interest rates as many as three times this year to combat inflation, hawkish policymaker Robert Holzmann said over the weekend.

The benchmark STOXX 600 has shed over 5% so far in May, as China’s COVID curbs, aggressive monetary policy tightening and the Ukraine war stoke concerns about a global economic slowdown. The index is down about 14% since hitting an all-time high in January.

Adding to the gloom, investor morale in the euro zone fell in May to its lowest level since June 2020, as the impact of the war in Ukraine on Europe’s largest economy becomes increasingly clear.

“The positive effects of the good Q1 reporting season and activity reopenings could be short lived,” Morganti added.

Of the nearly 60% of European companies that have reported results so far, 72% have topped analysts’ profit estimates, as per Refintiv IBES data. In a typical quarter, 52% beat estimates.

Chipmaker Infineon fell 2.4% despite lifting its full-year outlook as it benefits from a global shortage of semiconductors.

Defensive sectors such as utilities and telecoms fell the least, while oil & gas stocks were flat with brokerage Cowen lifting price target on oil major Shell.

(Reporting by Sruthi Shankar in Bengaluru; Editing by Subhranshu Sahu and Vinay Dwivedi)