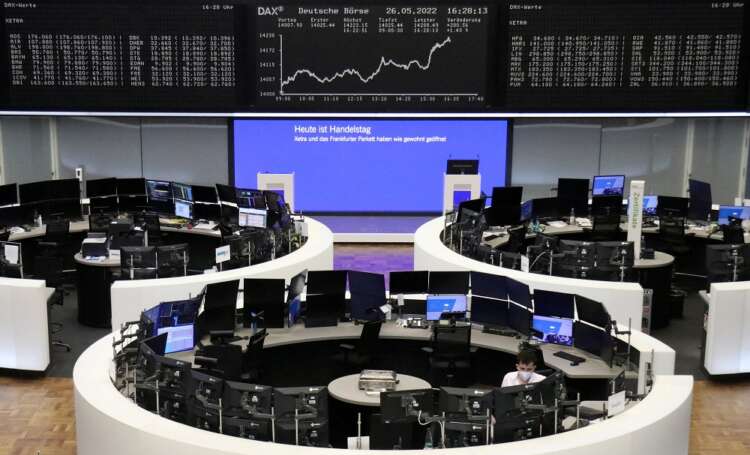 (Reuters) -European shares extended gains for a third straight session on Friday and were set for their biggest weekly jump in more than two months, as easing bets about aggressive interest rate hikes by central banks lifted sentiment.

Technology, industrial and luxury stocks were among the biggest boosts to the STOXX 600, while miners , up 1.8%, led gains among sectors.

For the week, the index was seen closing around 2% higher, its biggest weekly jump in 10. Banks were among the best performers this week, up around 5%, as major central banks stayed on course to hike interest rates.

Market volatility earlier this week due to speculations about monetary policy was put to rest after the U.S. Federal Reserve signalled it could pause after 50 basis points hikes in the next two months. The European Central Bank said it was set to begin its hiking cycle in July.

“Markets feel a little happier that they know where things are going to go, and also that there’s going to be a real focus from central banks to make sure that they do take a measured approach… to create this soft landing to prevent economies from going into recession,” said Danni Hewson, financial analyst at AJ Bell.

Worries about the Russia-Ukraine war further fuelling energy prices, and worries about demand from China amid COVID-19 curbs hitting growth, have also weighed on stocks recently.

The STOXX 600 is on track to end May lower, leaving March as the only month it marked gains this year.

British retailers had rallied on Thursday on hopes that a 15 billion pound ($18.92 billion) package of support from the government for households will encourage them to keep spending.

But this may not be enough to significantly bolster retailers, said Hewson.

“You start to dig into the numbers (in the stimulus package) and realize that this little bit of help is probably going to have to be repeated,” said Hewson.

(Reporting by Susan Mathew in Bengaluru; editing by Uttaresh.V and Rashmi Aich)

How Broadcom CEO Tan shaped a tech giant through acquisitions