European shares bounce back with eyes on cenbank updates 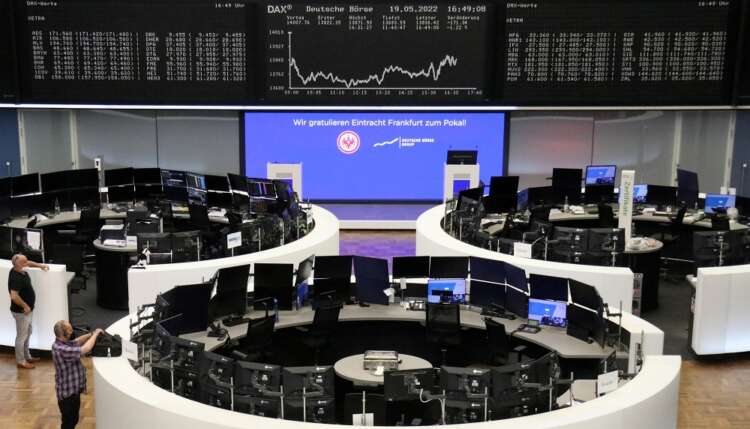 (Reuters) – European shares eked out gains on Wednesday, lifted by resource-linked stocks and banks, with investors watching for updates from central banks on monetary policy tightening amid rising concerns of an economic slowdown.

Focus will be on minutes of the U.S. Federal Reserve’s previous meeting, due later in the day, to asses the thinking among policymakers on the path for interest rate hikes.

European Central Bank chief Christine Lagarde’s speech at the World Economic Forum on Wednesday will also be closely followed after she struck a hawkish tone earlier this week. Traders are pricing an interest rate hiking cycle beginning in July.

“Investors are reassessing continuously the likelihoods of continued tightening by the Fed and other central banks,” said Andrea Cicione, head of strategy at TS Lombard.

“What will transpire is that the Fed remains determined to normalize monetary policy. After they’ve reached what they believe is neutral policy, which might be in the region of 3%, they will reassess. The minutes will confirm that, for now, the Fed is not blinking.”

Banks, which benefit when interest rates rise, hit a fresh one-month high and were among the biggest boosts to the STOXX 600.

“Sentiment is so fleeting at the moment that investors are willing to flee from one asset class or market to another at the first sign of weakness or disruption,” said Stuart Cole, head macro economist at Equiti Capital.

Energy and material stocks were the biggest gainers in Europe. Oil prices rose, buoyed by tight supplies and the prospect of rising demand from the upcoming start of the summer driving season in the United States. [O/R]

Meanwhile, the utilities sector rose 1.4% as power generators recovered from a plunge spurred by worries about a windfall tax.

A survey on Wednesday showed German consumer morale is projected to inch up in June but warned of inflation crimping household spending. This follows data on Tuesday that showed resilience in euro zone business growth amid a slowdown.

Among other stocks, Swedish medical equipment maker Elekta gained 4.8% on a profit beat, while British retailer Marks & Spencer slipped as it warned on the outlook for the current year.

(Reporting by Susan Mathew in Bengaluru; Editing by Sriraj Kalluvila)

Danone, Reckitt race to ramp up US baby formula supply amid shortage