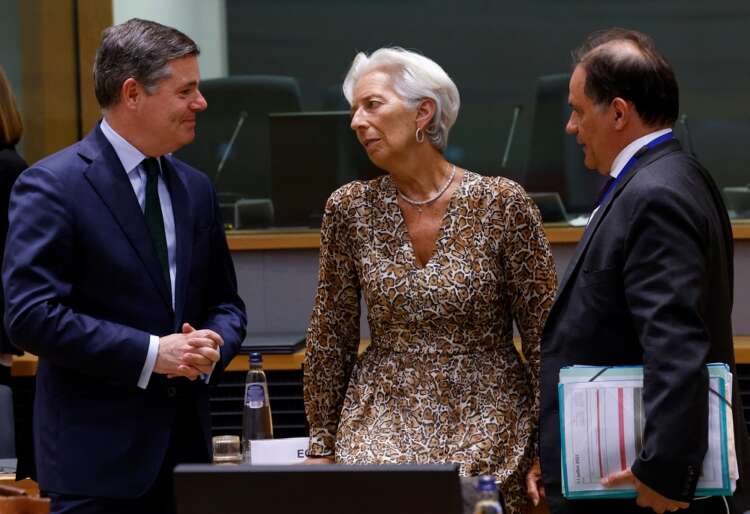 BRUSSELS (Reuters) – Euro zone finance ministers are likely to pledge on Monday that national financial shields against soaring energy costs will be temporary and targeted, so as not to trigger a wage-price spiral that would boost already record high inflation, officials said.

The ministers, meeting in Luxembourg for regular monthly talks, are likely to issue a statement on their fiscal response to the unfolding cost-of-living crisis, caused by the collapse of Russian gas deliveries to Europe.

Talks on the fiscal response come as Germany, the euro zone’s biggest economy, announced last Thursday it would borrow on the market to finance a 200 billion euro ($195.32 billion)support scheme for companies and households hit by energy costs.

The size of the German response is a multiple of the 67 billion euros so far announced by France or the 68 billion euros planned by Italy. It is also much more than smaller euro zone countries can afford, raising European Commission concern about keeping fair competition among EU companies.

The size of total euro zone government help for the economy, which already exceeds half a trillion euros, is also a headache for the European Central Bank, which has been raising interest rates to stem record high inflation that hit 10% in September.

The support, while easing the immediate pain of more expensive energy, also distorts price signals from the market that would normally force reduced consumption and works against the ECB’s efforts to bring down inflation, officials said.

They also mean large new government borrowing, which not all euro zone governments can easily afford without triggering a possible market backlash. Officials said the sharp fall of the pound in response to Britain’s large borrowing plans was a warning sign.

To retain fair competition and diminish the risk of market jitters, some euro zone officials have floated the idea of new joint EU borrowing to finance a joint response to the energy challenge.

To overcome scepticism from northern euro zone countries, the plan could be modelled on the unemployment support plan from the COVID-19 pandemic, which passed on jointly borrowed cash to governments as cheap loans rather than grants.

The Commission also points out that EU governments can still take up 225 billion euros of unused cheap loans from the EU’s post-pandemic recovery fund and use them to deal with the energy crisis.