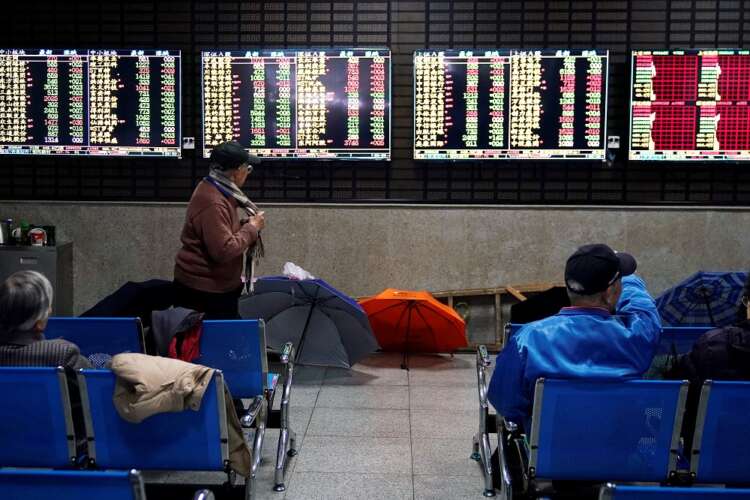 LONDON (Reuters) – Global shares got a tech boost to help tee up a third straight week of gains on Friday, despite growing inflation concerns, while the dollar dipped and oil prices bounced off their lows.

Data on Friday showed euro zone inflation expectations are at their highest in years, amid a rash of warnings from companies including Nestle, ABB and Unilever.

The five-year, five-year forward inflation swap, a key market gauge of long-term euro zone inflation expectations, jumped four basis points on Friday to hit its highest since September 2014 and the bloc’s target at 2.0029%.

“The ECB meets next week, it has plenty to discuss, a faltering economy and rising inflation; it is under pressure to tackle the inflation spike but needs to tread carefully with any change in policy.”

However analysts at Bank of America said they expect the ECB to “push back” against those in the market betting it will be forced to raise rates.

“Indeed, small increases in inflation expectations can be positive for markets if it helps to banish fears of deflation. Furthermore, by our assessment, global growth remains strong, supply chain challenges should recede into 2022, and corporate earnings should continue to grow.”

All eyes next week will be on the tech sector again, as Facebook, Apple, Amazon, and Google-owner Alphabet all report, with bulls hoping they can follow forecast-beating earnings this week from Netflix.

By late morning in Europe, the dollar index, which gauges the greenback against six major rivals, was down 0.1% to 93.614, despite initially bouncing off recent lows after U.S. jobless claims fell to a 19-month low, pointing to a tighter labour market.

Yields on benchmark 10-year Treasury notes, meanwhile, gave up some of the previous day’s gains to trade around 1.6890%, easing back from a five-month high of 1.7050% reached overnight.

The U.S. Federal Reserve has signalled it could start to taper stimulus as soon as next month, with rate hikes to follow late next year. Full employment is among the Fed’s stated requirements for rates lift-off.

Across commodities, oil prices bounced off their overnight lows, up 0.5-0.6%, with both Brent crude and West Texas Intermediate back in the black for the week after earlier threatening to break a multi-week winning run.

Gold was up 0.6% on the back of the weaker dollar, on course for its second week of gains.