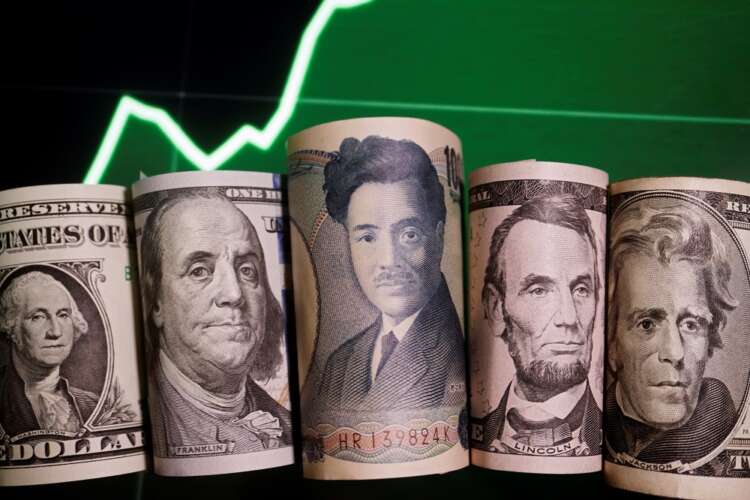 By Kevin Buckland and Rae Wee

The U.S. currency sank as low as 135.105 yen, its weakest since July 6 after the Fed raised the benchmark rate by an as-expected 75 basis points to bring it closer to neutral, while noting that although the labour market remains strong, other economic indicators have softened.

The dollar-yen is highly sensitive to shifts in U.S. yields, which slid after Powell said that based on the strength of employment, he didn’t believe the economy was in recession, and that a recession was not necessarily required to tame super-heated inflation.

“The dollar lost a little bit of altitude because I think the market was bracing for the potential of Fed chair Powell to sound a little bit more hawkish,” said Rodrigo Catril, a senior FX strategist at National Australia Bank.

“The markets sort of focused on his comments around the fact that we are getting very close to neutral,” Catril said. “There’s potential now to slow down the pace of hikes, and the market likes that.”

The two-year Treasury yield, which is especially sensitive to policy expectations, sagged near its lowest level this week at 2.9979%.

It remained about 20 basis points above the 10-year yield though, widely seen as signalling a looming downturn.

Whether the U.S. economy meets the definition of a technical recession by posting two straight quarters of contraction will be known later on Thursday with the release of GDP figures, which will be the market’s next major focus.

“People are reducing their long (dollar) positions ahead of potentially negative data out of the U.S.,” said Masafumi Yamamoto, chief currency strategist at Mizuho Securities in Tokyo.

Against the yen specifically, “those who had expected rapid rises of U.S. interest rates are probably here taking profit,” Yamamoto added.

The dollar index, which measures the greenback against six counterparts including the yen, edged 0.05% lower to 106.31 after dropping 0.59% overnight. Below 106.1 would be the lowest since July 5.

The euro, which is the most heavily weighted currency in the index, was little changed at $1.02045, following a 0.82% jump overnight.