MUMBAI, India, Jan. 14, 2022 /PRNewswire/ — LootMogul is happy to announce a partnership with the Sandbox, a virtual Metaverse where players can play, build, own, and monetize their virtual experiences, empowering artists, creators, and players to build the platform they've always envisioned. 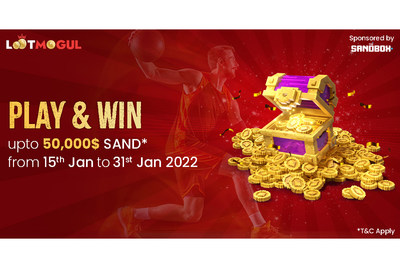 Through this partnership with LootMogul, the Sandbox will sponsor some of these tournaments and allow players to earn SAND tokens which will be added to the cryptocurrencies used for giveaways to winners of influencer-led contests.

In the future, the Sandbox might include more Sandbox NFTs to be won as part of gaming contests so keep an eye out for these announcements.

The first tournaments that will be sponsored by The Sandbox within the LootMogul platform will take place between January 15, 2022 and January 31, 2022.

Players will have opportunities to win from a prize pool of 50,000 SAND during these two weeks.

There will be more events co-hosted by LootMogul and The Sandbox, with opportunities for players to earn and win more goodies and in-game assets.

According to the founder & CEO of NextGenTM and LootMogul.com, Raj Rajkotia, “The video-game industry has always been on the bleeding edge, and blockchain gaming is widely viewed as emerging technology. With the introduction of the concept of a 'metaverse', the goal is to empower folks with the ability to earn and hold digital assets that can exist within or outside of any game. Through this partnership, we explore synergies with the Sandbox game that would benefit both our audiences, engaging them with possibilities which may not have been possible without this partnership.”

Here's what Kuntal Sampat, COO of NextGenTM and LootMogul.com, has to say, “NFT marketplaces like LootMogul have been increasingly changing the way creative assets including media, art and entertainment can be earned, auctioned or traded on a digital platform. With a bid to diversify the NFT ecosystem, a large number of companies are now exploring play-to-earn games, which are gradually piquing the interest of creators, gamers, crypto experts and NFT enthusiasts. In addition, Roblox, Facebook, Tencent, Microsoft and Epic Games are some of the many companies that are aggressively exploring the NFT gaming space. We believe there would be more such partnerships LootMogul would be a part of in the future.”

LootMogul a influencer-based gaming, NFT, Crypto social gaming startup based in Santa Monica, CA, and serves as a platform for influencers and fans to monetize across the USA. LootMogul facilitates influencer based real money gaming and positions itself as a revolutionary NFT platform. Founders and executives of LootMogul bring tremendous network and experience from working at Riot Games, Warner Bros, Microsoft, Sachar Gaming, etc. LootMogul has completed three rounds of funding till date, through prominent angels and early-stage venture investors.

LootMogul is empowering influencers with their personalized game contests, their meta-avatars, and exclusive content (tradable NFTs) for their fans. World-wide fans play LIVE with the influencers or their Meta Avatar to earn exclusive NFTs & Crytpo tokens. LootMogul's premier game is a real-time battle-style sports trivia, led by influencer from NBA, NFL, NHL, MLB, UFC, MLS athletes, and some other categories like Poker, General Trivia.