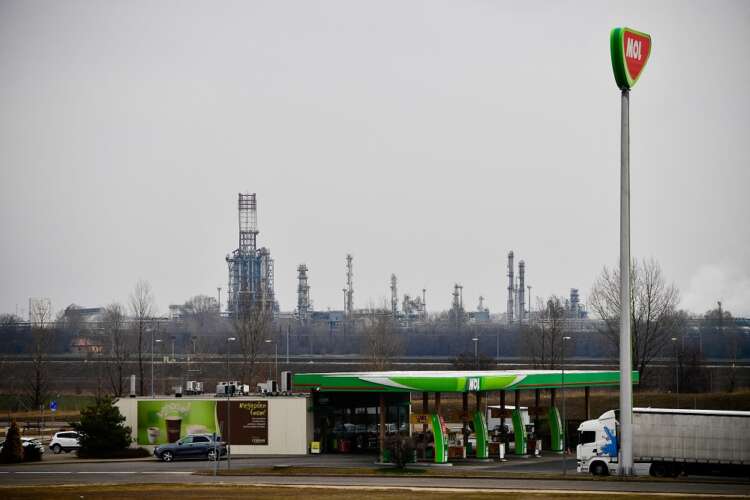 BUDAPEST (Reuters) -Passenger car drivers in Hungary will be limited to buying 50 litres of fuel a day from Friday at fuel stations owned by Hungary’s MOL and Austria’s OMV, in a move to avert disruptions caused by a government price cap.

MOL’s announcement halved the previous limit it imposed on refuelling. OMV said its 50-litre limit only applied to fuel that fell under the price cap, which the government imposed to since November to protect the population from surging inflation.

MOL, which owns the largest network of service stations in the country, has called for phasing out the price cap that set the retail price for both 95-octane gasoline and diesel at 480 forints ($1.27) a litre.

Prime Minister Viktor Orban’s government introduced the cap, now set to run till October, to shield consumers from inflation now at its highest level in two decades. The government limited the cap to cars with Hungarian licence plates, a move that has triggered a conflict with the European Union.

“We have introduced this limit (on refuelling) … in order to be able to guarantee security of supply,” MOL spokeswoman Piroska Bakos told Reuters, adding that buyers filling up jerry cans with fuel would no longer eligible for capped price fuel.

OMV, which has almost 200 service stations in Hungary, said it would charge a market price for fuel sold for jerry cans.

Friday’s announcement is the latest sign that intervention in the fuel market has affected the balance of supply and demand. Austria and Hungary released part of their strategic fuel reserves over the past weeks to stabilise the market.

MOL spokeswoman Bakos said demand for fuel normally rose by about 30-40% over the summer due to tourism and the farming season, which boosts diesel demand. But, the price cap has driven down fuel imports, which MOL has to offset now.

Hungary said this month it was releasing part of its strategic oil reserves for OMV to purchase and distribute inside Hungary to prevent fuel shortages, after an incident at OMV’s refinery near Vienna.

(Reporting by Krisztina Than and Gergely Szakacs; Editing by Edmund Blair)