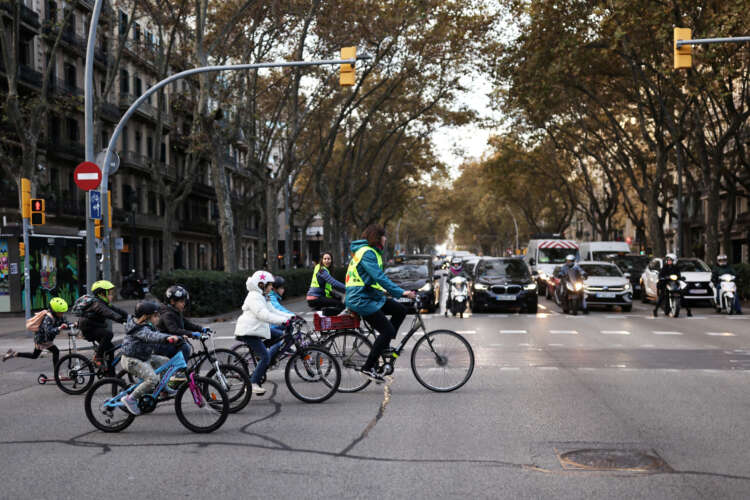 Barcelona’s bike bus, or “bicibus”, as the scheme is known locally, allows hundreds of children to cycle safely to school in a convoy, taking over entire streets in Spain’s second largest city.

The citizen-led project, supported by Barcelona City Council, began in March 2021 with one route in the Sarria neighbourhood. It now has 15 routes and has inspired similar schemes in the Scottish city of Glasgow and in Portland in the United States.

Eight-year-old Lena Xirinacs joins the Eixemple route every Friday with her father, who is one of the volunteers ensuring that the children are safe on the road.

“She wakes up with joy. I could use it as an excuse every day so that she jumps out of bed,” Pablo Xirinacs said.

The Eixample route starts at 8.30 am and covers 2.5 kilometres (1.55 miles) in 25 minutes, dropping children at three schools along the way from Monday to Friday. Not all routes operate on a daily basis.

Road safety is ensured by a Barcelona police car escort and vigilant parents like Xirinacs, one of 80 parent volunteers in the city, who join the convoy.

Organisers estimate that more than 700 people joined the different routes during the 2020-21 school year, which translates into about 15,000 commutes to different Barcelona schools over that time.

“We anticipate that children who participate in ‘bicibus’ will be more likely to ride a bike, have better cycling habits, more sustainable transportation habits, and we think they will change the travel patterns of their family as well,” Honey-Roses said.