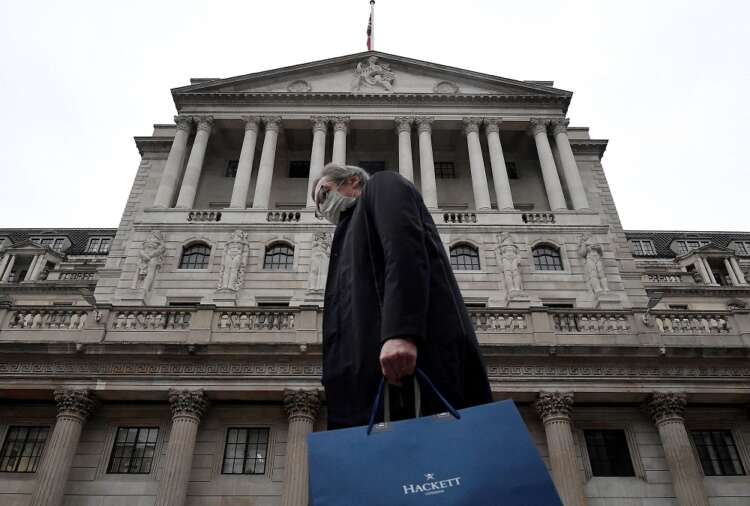 By David Milliken and William Schomberg

LONDON (Reuters) -The Bank of England should raise rates faster than it has so far because sterling’s weakness is adding to Britain’s inflation pressures, interest-rate setter Catherine Mann said on Monday.

Mann – who voted unsuccessfully for a half-point increase in interest rates last week – said the U.S. Federal Reserve’s latest tightening plans, and the likelihood of similar moves from the European Central Bank, were pushing down on sterling.

“In my view, a more robust policy move … reduces the risk that domestic inflation already embedded is further boosted by inflation imported via a sterling depreciation,” Mann said at an event organised by Market News International.

Sterling has fallen 6% against the U.S. dollar over the past two months.

The BoE raised its benchmark interest rate by a quarter point to 1.25% on June 16 and said it was ready to act “forcefully” if needed to stamp out dangers posed by inflation.

While the BoE was the first major central bank to raise interest rates after the COVID pandemic, and has raised rates five times since December, it faces a major challenges with inflation forecast to hit 11% by October. It last increased interest rates by half a percentage point in 1995.

Mann said there were signs that the jump in inflation in Britain – which hit a 40-year of 9.0% in April – was becoming more embedded and persistent, and had more momentum after government support measures for households.

She said the BoE should pursue an activist approach to policy, raising interest rates more aggressively in the short-term to bolster sterling and dampen inflation, then being ready to cut them once the economy needed more support.

“I open the door to a policy rate reversal in the medium term when the domestic supports to demand fade and when weakness in external sources of demand bite,” Mann said.

Financial markets price in BoE rates peaking at 3.5% in August 2023, before possibly being cut at the end of that year.

However Gertjan Vlieghe, Mann’s immediate predecessor on the Monetary Policy Committee, challenged Mann in a question and answer session on whether the links between U.S. monetary policy, sterling and inflation were robust and rapid enough to finetune BoE policy.

Vlieghe also suggested the BoE would benefit from being explicit about whether it expected to raise interest rates above their long-term neutral level.

Mann said the MPC was divided over how resilient consumer demand would prove in the face of surging inflation, but that she expected businesses would retain pricing power in the near term as households used savings built up in the pandemic.

(Reporting by David MillikenWriting by William SchombergEditing by Bernadette Baum)