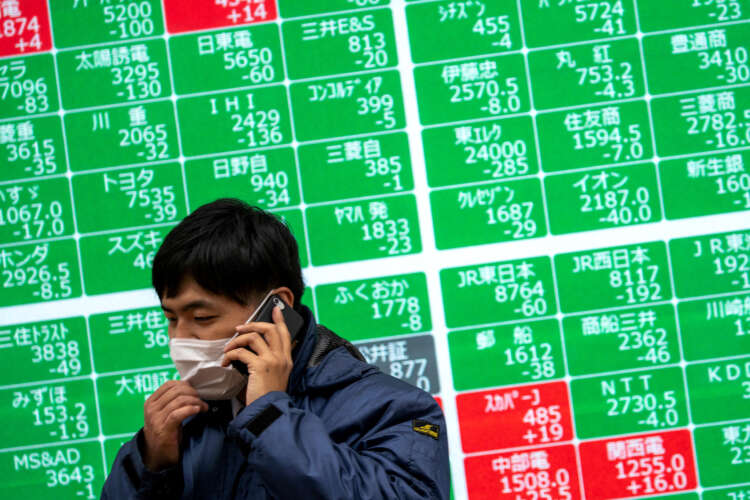 Despite the steadier start in Asia, analysts at ING said geo-political risks, notably the possibility of Russia invading Ukraine, could continue to weigh on global shares, adding to existing pressure from the rising rates outlook.

“Markets may soon start to take into account a greater risk of a conflict flare-up between Russia and Ukraine, which is one reason why stocks may continue to sell and why Treasury yields aren’t on a one-way ticket higher.”

U.S. President Joe Biden predicted on Wednesday that Russia will make a move on Ukraine, saying a full-scale invasion would be “a disaster for Russia” but suggesting there could be a lower cost for a “minor incursion.”

The sell-off hit bonds as well, pushing U.S. Treasury yields to two-year highs on Wednesday, and taking Germany’s 10-year yield into positive territory for the first time since May 2019 as investors bet policymakers will curb years of stimulus in order to fight rising inflation exacerbated by supply chain disruption.

“There comes a point when you’ve offloaded, you might want to stop offloading. If bonds start to rally a little bit, and you saw yields ease off yesterday in the U.S., it kind of feels like … we might actually not get a follow-through today,” said Matt Simpson, senior market analyst at City Index in Sydney.

In stark contrast with the global move toward tighter policy and higher rates, China on Thursday cut its mortgage reference rate for the first time in nearly two years. The move followed a surprise cut to the central bank’s rate for one-year medium-term loans on Monday.

Chinese monetary authorities have signalled that they will take more easing steps this year to shore up slowing growth in the world’s second-largest economy. Data released on Monday showed weakness in consumption and the property sector darkening the outlook despite a strong headline growth figure.

The modest gains in Asia came after investors on Wall Street looked past robust earnings at the outlook for inflation and rate rises.

The pause in Treasury yields’ march higher kept the dollar in check, with the dollar index which measures the greenback against six major peers at edging down to 95.477 as commodity currencies benefited from high oil prices.

The Aussie dollar was 0.4% higher.

Oil prices, which had touched their highest levels since 2014 on Wednesday on strong demand and short-term supply disruptions, fell back. Global benchmark Brent crude was 0.84% lower at $87.70 per barrel and U.S. crude dropped 1.1% to $86 per barrel. [O/R]

Gold continued to crawl higher after marking its best session in three months a day earlier. Spot gold rose 0.08% to $1,841.12 an ounce.