Pebblebrook Hotel Trust (NYSE: PEB) (Pebblebrook or the Company) today announced the completion of its previously announced acquisition of LaSalle Hotel Properties (LaSalle). With a portfolio of 64 upper-upscale and luxury hotels in or near 18 key urban markets, the combined company is now the largest owner of independent, lifestyle hotels.

We are thrilled to bring together these two outstanding companies to create the premier, best-in-class lodging REIT, which we expect will maximize long-term value for all of our shareholders, said Jon E. Bortz, Chairman, President and Chief Executive Officer of Pebblebrook. We are eager to begin realizing the substantial benefits of this strategic combination as we execute our proven strategies with our newly expanded and diversified portfolio of unique hotels and resorts. I want to acknowledge Michael Barnello for his two decades of accomplishments at LaSalle and welcome LaSalles employees to our Pebblebrook family as we take the next step in the evolution of our company.

In connection with the closing of the merger, five hotels were sold, generating $820.8 million of gross proceeds. The aggregate gross sales proceeds reflect a 15.6x EBITDA multiple and a 5.5% net operating income capitalization rate (after an assumed annual capital reserve of 4.0% of total hotel revenues) based on the trailing twelve-month operating performance for the period ended October 31, 2018. The gross sales prices and hotels sold were as follows:

The sales of Gild Hall, New York and Embassy Suites Philadelphia City Center for a combined $105.8 million of gross proceeds represent the first sales pursuant to Pebblebrooks previously announced strategic disposition program to sell between $750.0 million and $1.25 billion of LaSalle-legacy hotels over the next six to twelve months. The strategic disposition program will reduce Pebblebrooks debt leverage while enhancing the quality and growth of the combined portfolio. As a result of these completed property sales and lower than previously forecasted merger transaction-related costs, Pebblebrooks total net debt to trailing 12-month corporate EBITDA is estimated to be 5.1 times.

Our completed property sales demonstrate our ability to quickly execute on our strategic disposition program, noted Thomas C. Fisher, Chief Investment Officer of Pebblebrook. We continue to be encouraged with the level of buyer interest in the assets that we are actively marketing for disposition.

For additional information or to receive press releases via email, please visit our website at www.pebblebrookhotels.com

A Samsung veteran with over three decades of experience, Mr. Sangho Jo most recently led Samsung Electronics Europe and has returned to the Southeast Asia & Oceania region

A proven Samsung leader with over three decades of experience across business groups and geographies, Mr. Jo will steer the strategic growth directions of Samsung Electronics in Southeast Asia & Oceania.

Markets in Southeast Asia & Oceania are integral to Samsung Electronics’ long-term growth plans, with the region poised to sustain its rapid economic growth into the next decade, built on the digital ambitions of its cities, industries and communities. Mr. Jo will guide the business towards cementing its industry leadership and seizing long-term growth opportunities in this region by forging partnerships, creating operational excellence, and ultimately, building brand trust amongst consumers and enterprises.

Mr. Jo is not new to the Southeast Asia & Oceania region, having worked in Samsung Electronics Singapore (1997), Vietnam (1998 — 2000) and Malaysia (2007 — 2008). He said: “I am pleased to return to Southeast Asia and Oceania, and lead one of the vibrant leading hubs for Samsung Electronics globally. I look forward to strengthening the strong relationships we have built with our partners and customers here and explore exciting new consumer and commercial partnerships, steering Samsung into the next stage of growth in the region.”

“In an era defined by rapid digital disruptions, we are committed to empowering the digital ambitions of nations, industries and communities in Southeast Asia and Oceania, and to help fulfil the potential of the people here through next-generation technologies,” he added.

Samsung inspires the world and shapes the future with transformative ideas and technologies. The company is redefining the worlds of TVs, smartphones, wearable devices, tablets, digital appliances, network systems, and memory, system LSI, foundry and LED solutions. For the latest news, please visit the Samsung Newsroom at http://news.samsung.com.

HONG KONG SAR – Media OutReach – 5 January 2021 – The COVID-19 epidemic has lasted for nearly a year. The sharp fall in the street traffic has been affecting core shopping districts everywhere. In addition, under the “Anti-epidemic Fund”, the Innovation and Technology Commission (ITC) launched the ” Distance Business (D-Biz) Programme subsidy. Increasing number of large and medium-sized enterprises have turned to the online market, setting up websites and opening online shops, in an effort to open up online sales channels to recover some of their businesses during the epidemic.

As many companies are not familiar with website technology, website optimization and SEO promotion are often ignored. In fact, SEO is one of the highest ROI of many online marketing channels and it is worthy of a long-term investment.

HKGSEO has performed SEO for more than 500 enterprises, with the SEO process bringing considerable traffic and sales to the companies. Leveraging on their years of experience, they now provide free website analysis (worth HK$2,000) for all content types. Here are some website analysis projects HKGSEO has engaged in:

We recommend using the most popular CMS in the market to build a website. Well-known CMS such as WordPress, Wix, Shopline, and Shopify will make it easier to manage web content and make the website easier to crawl and index by search engines.

HKGSEO hence cautions against web design companies that use their own CMS. Generally speaking, these websites are not SEO friendly. For example, they might have undesirable attributes such as duplicate page titles, dynamic URLs, or category pages that cannot update new content, etc. These attributes are disadvantageous to implementing SEO plans, which ultimately leads to the redesigning of the entire website, resulting in a much higher cost.

If your website does not have an SSL certificate (HTTPS) installed, it will be marked as an insecure website by the browser, which will adversely affect the credibility and conversion rate. SSL should be installed immediately to protect customer information, especially for e-commerce websites. There are some free SSLs available on the market, such as Let’s Encrypt, with paid premium certificates recommendation by online shops.

The latest personal computer and Internet penetration survey published by the Census and Statistics Department shows that more than 5.97 million people in Hong Kong have mobile phones, and 99.7% of the users access the Internet on smartphones, higher than those connected to computers or other devices. Besides, Google has launched the Mobile-First Indexing mobile version of content priority indexing. If your website does not have a mobile version, the ranking will be poor and a lot of traffic will be lost.

According to research, more than 68% of viewers will leave a website when it takes more than 3 seconds to open. The main reason for the slow loading is the use of shared hosting or non-local hosting. Switching to local hosting, SSD or CDN can effectively improve the loading speed.

Is the website content of high quality? Does it answer the questions of potential consumers? To build up the content, some corporate websites have piled up keywords, and some have published blog articles regularly. However the content of the articles is sometimes plagiarized from news media. Plagiarism makes search engines recognize the overall website quality as low, which will in turn affect the ranking.

Websites and online shops are platforms that promote businesses. An optimized website will reward twice the results with half the effort of both online and offline marketing campaigns combined.

Please log onto www.hkgseo.com, fill in the website, email and contact number, and our network promotion experts will reply within one working day and arrange a free SEO analysis and consultation.

HKGSEO focuses on website SEO services. It is founded and operated by former Google employees. The company is based in Hong Kong and has branches in Shenzhen, Singapore and Australia. It is committed to providing affordable, one-stop digital marketing solutions for small and medium-sized enterprises. Digital marketing solutions include: SEO, SEM, social media promotion and web design, etc. 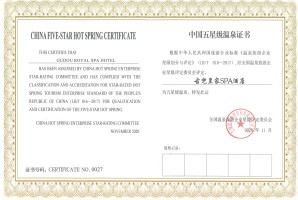 The star rating standard for hot spring tourism enterprises is based on the “Star Classification and Evaluation of Hot Spring Tourism Enterprises” (LB/T016-2017) issued by the former National Tourism Administration, which stipulates the star classification conditions, service quality and operation specifications of hot spring tourism enterprises. According to the overall requirements, hot spring water area, housekeeping, catering, other service items, public and logistics areas and other evaluation content, hot spring enterprises are divided into one to five stars, with five stars being the highest.

Gudou Holdings is a hot spring resort and hotel operator and a tourism property developer in the People’s Republic of China (“PRC”). It principally engages in (i) the operation and management of the hot spring resort and hotel facilities of Gudou Hot Spring Resort, which is a national AAAA-level tourist area, and provision of consultancy and/or management services; and (ii) the development and sale of tourism properties in Guangdong Province. The “Gudou” brand is a well-known brand of integrated hot spring resort in the PRC. Gudou Holdings operates six theme hotel complexes, namely Royal Spa Hotel, Hot Spring Villa Hotel, Mountain Seaview Hotel, Joyful Hotel, Gudou Lakeview Tulip Inn Hotel and Yuequan Huju Hotel together with a variety of leisure and recreational facilities, including hot spring facilities, hotels, commercial stores, food and beverages outlets, recreational waterpark, a spa centre, a conference centre, parks, tourist attractions and other ancillary leisure and recreational facilities.

Hit the record for the longest maturity period and the lowest coupon rate of the Group’s offshore bond issuance Optimize the...

Burkhard Eling takes up role of CEO at Dachser

The next generation has arrived: A new Executive Board team for the new year   KEMPTEN / HONG KONG –...

A Samsung veteran with over three decades of experience, Mr. Sangho Jo most recently led Samsung Electronics Europe and has...