A New Star in Treatment to Fight Cancer

HSINCHU, Taiwan, March 18, 2020 — ITRI’s work in the development of precision medicine has again garnered international accolades. After winning a 2019 R&D 100 Award, ITRI’s iKNOBEADS, the world’s only biomimetic knobby magnetic beads, have now been named a 2020 Edison Award winner. This breakthrough in treating cancer has put ITRI alongside other winning institutions such as 3M, IBM, and SRI International. The Edison Awards honors this year’s winners through a series of announcements over four weeks. iKNOBEADS in the Medical/Dental category was announced in the first round.

The iKNOBEADS are irregularly protruded-looking spiky balls that strengthen and activate T cells to fight cancer cells more effectively. “After a thorough review, the Edison Awards Judges recognize ITRI’s iKNOBEADS as a game-changing innovation standing out among the best new products and services launched in their category,” said Frank Bonafilia, Executive Director of the Edison Awards.

ITRI President Edwin Liu remarked that winning an Edison Award for iKNOBEADS highlights that Taiwan’s tech innovation and R&D abilities are on par with the best in the international community and are of great significance to improving the well-being of humankind. Dr. Liu also commented that innovation is an important driver in promoting industrial development. ITRI, he stressed, not only is committed to developing innovation and addressing global market demands, but also strives to enhance industrialization. By promoting the applications of the “Quality Health” domain under ITRI’s 2030 Technology Strategy and Roadmap, the institute integrates its innovative technologies with the prowess of Taiwan’s biomedical industry to jointly explore new R&D opportunities in cellular therapies, he said.

The iKNOBEADS manufacturing technology focuses on using magnetizing T cells to fight cancer more effectively. Magnetic beads typically are involved in in vitro activation, which is a mainstream method presently used in immunotherapies. The commercially available magnetic beads are spherical. The iKNOBEADS, however, feature a unique spiky structure, enhancing the activation efficacy and expanding the number of T cells by a factor of 100. Meanwhile, the number of iKNOBEADS required is only one-third that of the magnetic beads currently on the market, and they can make dormant T cells come alive, have memory-like functions, and lead the fight against cancer cells. By modifying the surface of the magnetic beads, the iKNOBEADS technology can be applied to the activation and expansion of γδT cells, becoming the world’s first and only magnetic bead product of this type and that offers this advantage.

The research team is currently focused on therapies for hematological cancers, such as blood cancer, lymphoma, and bone cancer, and it has discussed cooperation with a number of local and foreign medical centers and biotech companies using iKNOBEADS manufacturing technology as a platform. ITRI hopes in the second half of 2020 to launch clinical GMP products. In the future, it is hoped that this technology will be applied in a variety of immunotherapies, and in particular to solid cancers. This will benefit even more patients and become a new tool in the next generation of immunotherapies.

About ITRI Industrial Technology Research Institute (ITRI) is one of the world’s leading technology R&D institutions aiming to innovate a better future for society. Founded in 1973, ITRI has played a vital role in transforming Taiwan’s industries from labor-intensive into innovation-driven. It focuses on the fields of Smart Living, Quality Health, and Sustainable Environment.

Over the years, ITRI has incubated over 280 innovative companies, including well-known names such as UMC and TSMC. In addition to its headquarters in Taiwan, ITRI has branch offices in the U.S., Europe, and Japan in an effort to extend its R&D scope and promote opportunities for international cooperation around the world. For more information, please visit https://www.itri.org/eng.

A photo accompanying this announcement is available at https://www.globenewswire.com/NewsRoom/AttachmentNg/49a83535-3a2f-45ea-ac4d-33b625f08028 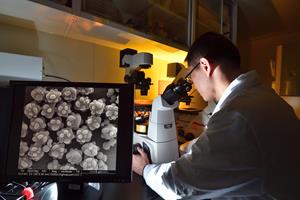