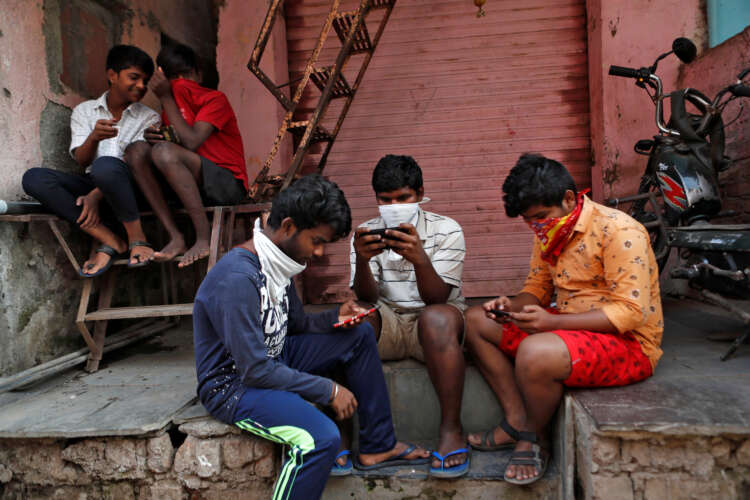 (Thomson Reuters Foundation) – As the founder of a consumer rights non-profit in India, Karnav Shah is used to seeing sharp practices and disgruntled customers. But even he has been surprised by the sheer volume of complaints against digital lenders in recent years.

While most of the grievances are about unauthorised lending platforms misusing borrowers’ data or harassing them for missed payments, others relate to high interest rates or loan requests that were rejected without explanation, Shah said.

“These are not like traditional banks, where you can talk to the manager or file a complaint with the head office. There is no transparency, and no one to ask for remedy,” said Shah, founder of JivanamAsteya.

“It is hurting young people starting off in their lives – a loan being rejected can result in a low credit score, which will adversely affect bigger financial events later on,” he told the Thomson Reuters Foundation.

Hundreds of mobile lending apps have mushroomed in India as smartphone use surged and the government encouraged digitisation in banking, with financial technology (fintech) firms rushing to fill the gap in access to loans.

Unsecured loan apps, which promise quick loans even to those without a credit history or collateral, have been criticised for high lending rates, short repayment terms, as well as aggressive recovery methods and misuse of customer data.

At the same time, their use of algorithms to gauge the creditworthiness of first-time borrowers disproportionately excludes women and other traditionally marginalised groups, analysts say.

“Credit scoring systems were intended to reduce the subjectivity in loan approvals by decreasing the role of a loan officer’s discretion on lending decisions,” said Shehnaz Ahmed, fintech lead at the Vidhi Centre for Legal Policy in Delhi.

“However, since alternative credit scoring systems employ thousands of data points and complex models, they could potentially be used to mask discriminatory policies and may also perpetuate existing forms of discrimination,” she said.

Globally, about 1.7 billion people do not have a bank account, leaving them vulnerable to loan sharks and at risk of being excluded from vital government and welfare benefits, which are increasingly dispersed by electronic means.

Nearly 80% of Indians do now have a bank account, partly as a result of the government’s financial inclusion policies, but young people and the poor often lack the formal credit histories that lenders use to gauge an applicant’s creditworthiness.

Almost a quarter of loan enquiries every month are from people with no credit history, according to TransUnion CIBIL, a company that generates credit scores.

Authorities have backed the use of AI for creating credit scores for so-called new to credit consumers, who account for about 60% of motorbike loans and more than a third of mortgages.

TransUnion CIBIL recently launched an algorithm that has “mapped the credit data of similar subjects that do have a credit history and whose information is comparable”, said Harshala Chandorkar, the firm’s chief operating officer.

Women made up about 28% of retail borrowers in India last year, up three percentage points from 2014, and have a slightly higher average CIBIL score than men, she said, without answering a question about the risk of discrimination from algorithms.

CreditVidya, a credit information firm, uses an artificial intelligence (AI)-based algorithm that taps “over 10,000 data points” to calculate its scores.

“A clear, unambiguous consent screen that articulates what data is collected and the purpose for which it will be used is displayed to the user to take his or her consent,” it said.

EarlySalary, which says its mobile lending app has garnered more than 10 million downloads, uses an algorithm that collects text and browsing history, and information from social media platforms including Facebook and LinkedIn.

People who do not have a substantial social media presence could be at a disadvantage from such techniques, said Ahmed, adding that many online lending platforms provide little information on how they rate creditworthiness.

“There is always an element of subjectivity in determining creditworthiness. However, this is heightened in the case of alternative credit scoring models that rely on several data points for assessing creditworthiness,” she said.

A long-delayed Personal Data Protection Bill under discussion by lawmakers would have conditions for requiring and storing personal data, and penalties for misuse of such data.

Authorised lending platforms are advised to engage in data capture with the informed consent of the customer, and publish detailed terms and conditions, said Satyam Kumar, a member of lobby group Fintech Association for Consumer Empowerment (FACE).

“Regular audits and internal checks of the lending process are done to ensure no discrimination on the basis of gender or religion is done manually or via machine-based analysis,” he said.

India’s central bank has said it will draw up a regulatory framework that “supports innovation while ensuring data security, privacy, confidentiality and consumer protection”.

That will help boost the value of digital lending to $1 trillion in 2023, according to Boston Consulting Group.

If an algorithm evaluates credit scores based on the number of contacts on a phone, it would likely find men more creditworthy as Indian men have greater social mobility than women.

So women may face loan rejections or higher interest rates.

“There is almost no transparency as to how these scores are reached,” she said.

Digital lenders justify the secrecy on grounds of competitive advantage, but there needs to be some clarification, including explanations when loans are rejected, she added.

“If these platforms make it easier for men but not women to start small businesses, it might reduce women’s agency in an already asymmetric power dynamic,” Prabhakar said.

“In the absence of strong monitoring and institutions, alternative lending may perpetuate the same arbitrary lending practices of informal credit markets that they aim to resolve.”

(Reporting by Rina Chandran @rinachandran; Editing by Helen Popper. Please credit the Thomson Reuters Foundation, the charitable arm of Thomson Reuters, that covers the lives of people around the world who struggle to live freely or fairly. Visit http://news.trust.org)